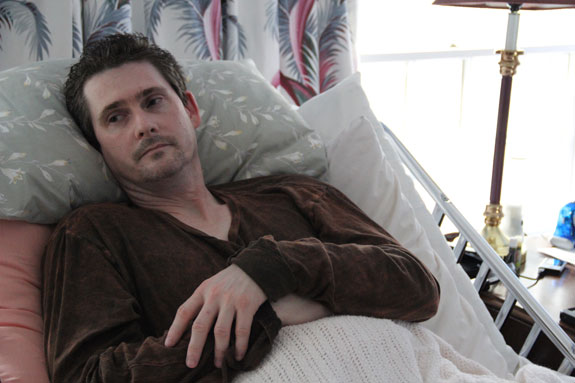 Years after being injured at USPS’s Orlando sorting facility, Jeffrey A. Lill remains gravely ill and in the care of his mother in New York. (Photo by J.J. Barrow.)

By Trevor Aaronson – February 27, 2015
A federal judge in New York threw out a lawsuit on Feb. 26 filed by an injured U.S. Postal Service worker from Orlando who became seriously ill after handling a package that was leaking a noxious chemical.

Jeffrey A. Lill, who worked at the Orlando mail sorting facility, was the subject of a May 2012 story by the Florida Center for Investigative Reporting and the Investigative Reporting Program at the University of California-Berkeley. After Lill handled the package and fell ill, the U.S. Postal Service denied that the incident had occurred and refused to pay Lill’s medical bills. But FCIR and IRP interviewed two witnesses and obtained an email that confirmed Lill had handled a suspicious package.

After the package was out of the building, Lill radioed his manager to notify her of the suspicious spill. She told him the next on-duty supervisor would finish handling the incident.

Lill’s throat burned, and the gas had given him a headache. He called his mother in Rochester, N.Y.

“I want you to know what happened at the Post Office,” Janet Vieau, 64, a real estate agent, remembered him telling her. “It might be on the news.”

But the incident never made the news. In fact, USPS did not investigate the suspicious package as a security or health threat and did not report it to the Department of Homeland Security, as is the protocol.

The package, now missing, has created a mystery — and solving that mystery could be the key to saving Lill’s life. In the weeks after his exposure to the package, Lill fell devastatingly and inexplicably ill. He suffers from extreme fatigue, tremors, and liver and neurological problems consistent with toxic exposure. He has become so sick that he cannot work and now must be cared for his by mother in New York. Lill’s doctors say they have no way to treat him without knowing what chemicals were inside the package.

All the while, USPS has refused to investigate, stating through lawyers that the incident never occurred.

Lill and his family are still fighting with USPS. They’ve had a few victories. A doctor determined that Lill had been exposed to some sort of neurotoxin. Additional witnesses came forward to confirm what Lill described had happened. He was granted a worker’s compensation claim for his injuries.

The judge ruled that because the worker’s compensation claim was granted, the USPS is immune from any Federal Tort Claims Act lawsuits.

But a lawyer for Lill, now 47, alleges the U.S. Department of Labor awarded him the worker’s compensation claim more than 30 months after his injury only to shield USPS from a negligence lawsuit. Lill had filed a negligence claim against USPS under the Federal Tort Claims Act, alleging that the postal service destroyed the package before it could be analyzed and preventing Lill’s caregivers from determining what chemicals it may have contained. U.S. law prohibits claims such as the one Lill filed if the alleged injuries can be covered by worker’s compensation claims.

As the Democrat and Chronicle of Rochester, N.Y. — which partnered with FCIR on the original story — reported on Feb. 26, Lill’s lawyer, Dennis Clary, had hoped U.S. District Judge Charles Siragusa would allow the lawsuit to proceed given the unusual circumstances of Lill’s injury.

According to Democrat and Chronicle reporter Meaghan M. McDermott:

Instead, Siragusa excoriated Clary for filing the suit.

“The law is crystal clear, and yet you decided to bring an action anyway?” he said prior to announcing his ruling.

Lill was unable to attend the hearing, but more than a dozen friends and family members did.

They were disappointed by the judge’s ruling.