By Eric Katz – October 27, 2016
Federal retirees with questions about their benefits have long waits before receiving customer service, often encountering busy signals and facing months of delays to written inquiries, according to a new report. 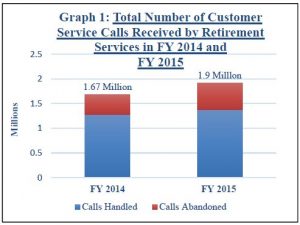 More than one in four phone calls to the Office of Personnel Management in fiscal 2015 from annuitants seeking assistance were ignored entirely, the agency’ inspector general found — more calls than the previous year. OPM’s Retirement Services provides customer service to 2.6 million federal annuitants, survivors and family members, and received 1.9 million calls last year. Callers regularly encountered busy signals when they dialed OPM’s toll-free number, the auditors said, and those who got through waited up to 20 minutes on hold.

Each annuitant is assigned a legal administrative specialist who serves as that retirees’ primary point of contact. When retirees indicate they have made multiple calls without a response, the inquiry is logged and escalated to a manager, who is required to respond within 48 hours. The IG found in a sample that 53 percent of the specialists were not responsive to messages left in their voicemail boxes and more than one-third of the specialists could not accept messages at all.

The IG discovered similar delays in written correspondence, finding OPM was failing to meet its goal to respond to all such communications within 60 days. The agency maintains a backlog of thousands of pieces of correspondence, and in some cases OPM took four months to process mail-in inquiries.

The problem also extended to Retirement Services’ walk-in center located in Washington, D.C., where 62 percent of the retirees the IG interviewed said they had made previous attempts “through various avenues” to receive customer service.

The slow and spotty customer service led to declining satisfaction ratings, the IG said, with an annual survey showing timely approval dropped 5 percentage points between fiscal years 2014 and 2015, to 66 percent.

OPM said it plans to hire an additional 42 specialists, which would bring the ratio down to one-to-19,000. This would still leave annuitants without “adequate access” to service, the IG said.

“As a result of excessive busy signals and long wait times, annuitants who attempt to contact RS to make changes, obtain information, report a death, or apply for retirement benefits are unable to get the assistance they need,” the auditors wrote. “This lack of adequate access to RS could potentially lead to unnecessary hardships for annuitants, survivors and family members, as well as potential overpayments being made by RS.”

The IG instructed OPM to come up with a better plan to reduce the ratio. OPM said it was already taking steps to address the problem, but had to deal with “current budgetary challenges/constraints.”