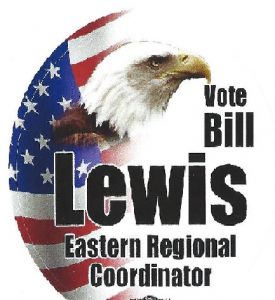 As local and state president for many years I am uniquely qualified to address all of the issues affecting our members. As a National Officer I will represent all crafts when our rights are denied. Effective communication with all locals is our pathway to success. We must engage in regular interaction with each other to share ideas and jointly develop action plans.

I am not retired – my opponent has been retired for the last 20 years. He has not dealt with the dramatic changes that have affected our lives and employment. Why is this important? How can a coordinator represent the membership when he is not a postal employee and has not been on the workroom floor for 2 decades?

The Eastern Region needs a full time representative and an active employee to be their voice on the Executive Board. I will bring a fresh voice and progressive ideas to deal with further closings and consolidations of plants and excessing scheduled in 2017. The track record for the last 6 years has not been too good.

I will work tirelessly to correct our broken arbitration process.

I have successfully negotiated countless agreements with proper compensation. Since our contractual dispute system is a huge failure. Currently, I have been successful in converting PSEs in our plants, I believe in conversion not reversion. The 204 B issues have brought thousands of dollars to my members for violations. Post Plan over 15 hours has yielded 4 of the highest payouts in the country. We must hold management accountable.

As president of the Trenton Metro Area Local #1020, I was successful in ensuring that the Trenton P&DC was taken back from the brink of anthrax laden demolition and closure to a fully restored and viable mail processing plant.

Under my stewardship, the Trenton Metro Area Local, through congressional communication and positive APWU marketing, successfully prevented the USPS from closing the Trenton P&DC forever.

As a staunch advocate for the APWU, in Trenton, I have secured thousands of grievance and arbitration victories for members of all crafts including a 5.3 million dollar travel compensation settlement.
My record of availability to all locals, large and small is second to none.
I continue to stand up and fight the injustices we face in the Postal Service and will always oppose those who deny us our rights.

Before you vote – ask yourself, what has the incumbent Eastern Regional Coordinator done for my local? Vote William “Bill” Lewis for responsive, involved and experienced leadership in our Eastern Region.

For more about my candidacy, please visit Billlewistmal.com or facebook.com/electbilllewis2016

3 thoughts on “Bill Lewis’s Election Article for the Membership”