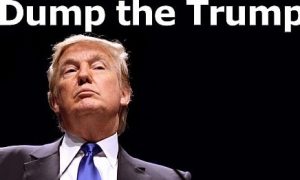 An online search for the word “demagogue” yielded this definition: a political leader who gains power by appealing to people’s emotions, instincts, and prejudices in a way that is considered manipulative and dangerous.

In this year’s Republican presidential primary, we’ve often heard that word used to describe their frontrunner, Donald Trump. The appeal of this man is startling to many, but there’s no denying that he’s caught the attention of a big chunk of the electorate. Unfortunately, that seems to include more than a few postal workers.

“Manipulative and dangerous” is the part of that definition that working class people should be especially wary of. “The Donald” promises many easy solutions to our country’s problems, but just like the Wizard of Oz, he doesn’t want you to “pay attention to the man behind the curtain.” Because if you look closely behind that veil, you’ll find a little man hiding in the shadows, using smoke and mirrors to make himself appear much more than he really is.

People are drawn to him because they like that he defies conventional political conduct. They like his brash attitude and take no prisoners approach towards politicians – but make no mistake, he is a politician. They perceive him as a “successful” self-made businessman, this despite the fact that the guy was born with a silver (gold!) spoon in his mouth and the troubling fact that he fails at most of his business endeavors. And now we’re hearing about one of those businesses – Trump University, (also failed) which he is being sued over for allegedly defrauding its students out of their money. They claim that he did not deliver on his promise of making them all rich. Keep in mind that’s the exact bait and switch promise he makes to all of us in his campaign speeches. He says he is going to make America great again! He’s going to bring back all the good jobs! He’s going to run the county like a business! Ripping off desperate students is bad enough; do you want the whole country to end up in their shoes?

Trump is a guy with no real ideological beliefs. If you’re considering voting for him because you perceive him as a “conservative values” candidate, you may be very disappointed. I have no doubt that Trump would open up a chain of drive-through abortion clinics if he thought he could make a buck off the deal.

He never really tells us how he’s going to fix our problems. Instead, he tries to pit one group of people against another. He says he wants to end illegal immigration and give those jobs back to Americans – but then he imports foreign workers into this country to work in his hotels. Like a magician’s sleight of hand, he uses the diversion of hate to try to keep your attention focused on one thing, while the other hand is playing a dirty trick on you. He claims to be a patriot, but then says that prisoners of war are losers. And if they’re losers, then we must assume that he considers all Americans who died in battle as losers. I’m not big fan of Senator John McCain’s politics, but I thought Trump’s attack on McCain’s military record was disgusting. And where was the brave Mr. Trump during the Vietnam era? Safe at home in one of daddy’s mansions, nursing the bone spur in his foot – the excuse for one of his five deferments from the draft.

For years now, our union has been fighting guys just like him. Guys who say they want to fix government by “running it like a business.” We all know what an abysmal failure that has been and the damage it has done to our organization. Run it into the ground by increasing costs, lowering service, and demanding that our customers do business with us on our terms – not theirs. We all know by now that not everything can or should be run with a profit motive as the priority consideration, but don’t try telling that to Mr. Trump.

He says if he’s elected, he won’t pay attention to the US Constitution! Do you think he’d bother honoring a union contract? Remember, this guy is famous for making entertainment out of firing people. You think he cares about just cause or due process? Is that really the kind of guy you want in charge? With him and his billionaire-class buddies running at the front of the pack, you know the view all of us at the back will staring at for four long years.

Democrat, Republican, Independent – when you get your ballot, make sure you do our country a favor by Returning Mr. Trump to Sender.