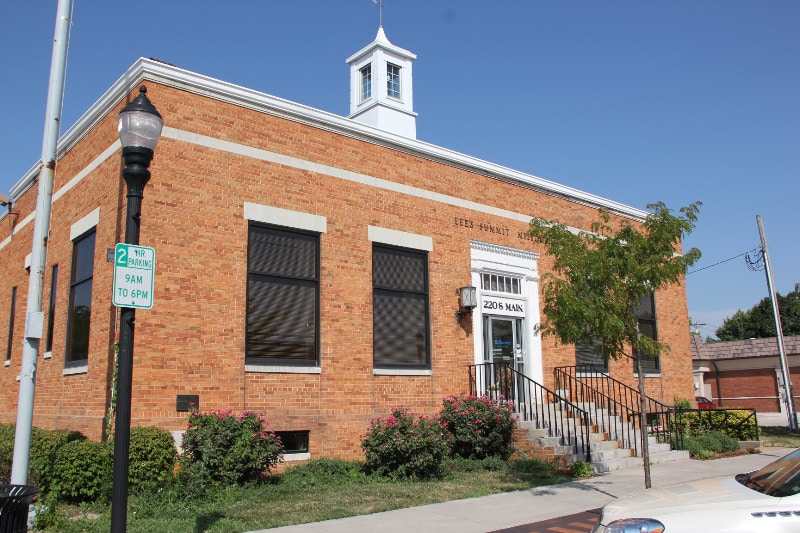 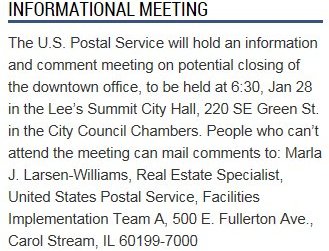 By Russ Pulley – January 21, 2015
The United States Postal Service might close its downtown Lee’s Summit office, moving the retail operation and post-office boxes to an existing facility about a mile away.

David Rupert, a spokesman for the Postal Service, said officials are in early stages of talking about the step, which would be a cost-cutting measure.

“Nothing’s settled, this is only a proposal,” Rupert said. If we implement it, it won’t be as convenient for everybody, but it will be more convenient for some.”

As Lee’s Summit has grown, more population has shifted toward the south.

In 2000, the Postal Service outgrew the downtown facility, so it moved its Lee’s Summit carriers at that facility and those operations to a building at 1404 SW Market St.

“That left 75 percent of our building (downtown) underutilized and we still have to heat and maintain that,” Rupert said. “It’s no secret we’ve had a significant volume drop, a steady decline since 2006, and we have to look at what’s redundant.”

Rupert noted that the agency is completely self-supporting through sales of stamps, items and delivery services. It does not get tax money, he said.

Most of postal services are available at the Hy-Vee locations, Rupert said.

The new facility would have 34 public parking space,s compared to a couple of dozen at the downtown store, he said. Workers at the downtown facility will move to 1404 Market St. to run the retail store and counter.

The 210 SW Market St. location, which opened in 1962, could be put up for sale, if the decision is to move the retail operation. That would be handled by the real estate section of the postal service, Rupert said.

Councilman Rob Binney, from District 1, which covers downtown, said he understands the Postal Services need to be financially responsible, but hopes some alternative is worked out.

Binney said that on the good side, the move would make redevelopment of the site possible.

He said it’s likely that many of the box holders live the older parts of Lee’s Summit, so the downtown location makes more sense for them.

“I hate to see the loss of the retail operations downtown,” Binney said. “If we lose that facility, I would like to see some kind of small-counter operation continue downtown.”