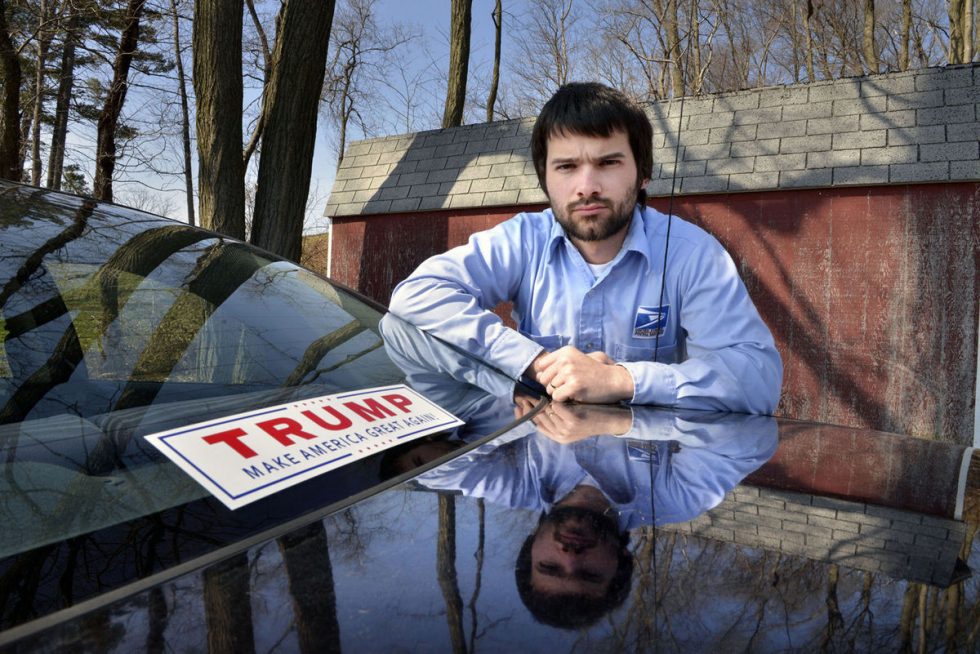 Tomas Strouhal shows the “Trump” sticker that is on his car outside his home in Quarryville. (Photo by Richard Hertzler)

By Sam Janesch – March 8, 2016
Tomas Strouhal just wanted to openly support Donald Trump. The 23-year-old Quarryville resident put a Trump bumper sticker on his 2003 Chrysler Sebring and hung up a newspaper clipping inside his locker at the Leola post office, where he works.

But Strouhal’s employer took issue with them. Citing the Hatch Act, which governs political activity by federal employees, his supervisor said the “Trump: Make America Great Again” bumper sticker must go if his car is parked in the post office parking lot.

That came as a bit of a shock to Strouhal, who migrated from the Czech Republic in 1997.

“I just think it’s really difficult to live in the country right now, with me as a working-class employee who is struggling to keep my family living while others have it so much easier,” said Strouhal, who has an infant daughter, Vada, with his wife, Kelly.

Strouhal’s employers backed down after a few days when they realized the rules allow one bumper sticker, even if the car is parked at the post office.

The Leola post office deferred comment to postal service spokeswoman Karen Mazurkiewicz. She referred to a 2011 letter from the postal service’s ethics department that reads, in part, “If the car is parked on postal or other government property, the Hatch Act limits to one the number of visible bumper stickers that can be placed on the vehicle.”

U.S. Office of Special Counsel supports the postal service interpretation, according to resources posted on its website, but cautions against displaying partisan political materials in a way that makes the vehicle look like a campaign vehicle.

Others familiar with the Hatch Act aren’t so sure.

Mary Catherine Roper, deputy legal director of the American Civil Liberties Union of Pennsylvania, said she is not aware of any provision in the Hatch Act prohibiting more than one bumper sticker.

“My opinion would be that that would violate the First Amendment,” Roper said. “The Hatch Act of course has been tested in court, and the very clear line that has been drawn by the court is that your behavior, your personal expression, is something that is not supposed to be regulated.”

Mike Stephenson, president of the Pennsylvania Postal Workers Union (which does not represent mail carriers), also said he was not aware of any limitations on the number of bumper stickers on a worker’s car parked at the post office.

Strouhal said he wanted only one bumper sticker, and the dispute over it, which happened in the fall, was resolved.

But there have been side effects.

Strouhal thinks it was his support of Trump, rather than some other candidate, that ticked off his supervisor. According to Strouhal, it’s caused his co-workers to treat him differently and have a general “attitude” toward him.

“There is a means and a method for somebody who is concerned for how they’re being treated,” said Mazurkiewicz, the postal service spokeswoman, but she wouldn’t comment on the specific situation brought up by Strouhal.

Strouhal said he has not spoken to anyone at work about how he feels he’s being treated.

The Trump sticker still is on his car’s back windshield, and Strouhal said he continues to support the Republican presidential front-runner.

In fact, Strouhal hopes to be naturalized as a citizen in time for the general election so he can vote for Trump, if the reality-star-turned-candidate is the GOP nominee.

“(Trump) is not a politician,” Strouhal said. “He’s a normal, working-class American, and my views are just like his.”