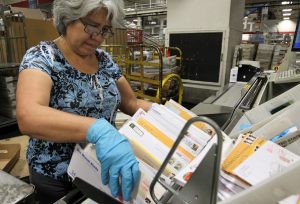 The United States shed 8.7 million jobs from the official onset of the Great Recession in December 2007 until the economy began regaining jobs in March 2010. Although the economy has since regained all jobs lost, some occupations are shrinking….

At the top of the list, the number of postal service clerks is expected to shrink by nearly one-third, a reminder of the ongoing U.S. Postal Service fiscal crisis. Also, the result of the growth of email and electronic bill paying as well as a growth in e-zines, electronic versions of what had been print magazines, all of which combine to decrease mail volume.

Topping the list of middle skill jobs likely to decline through 2022 is postal service clerks, who also happen to be the highest paid, earning almost $15,000 more annually than the second highest paid workers on the list. Postal service clerks perform a wide range of tasks such as receiving letters and parcels; selling stamps, post cards, and stamped envelopes; filling out and selling money orders; sorting mail and checking mail for correct postage. The jobs, though, are threatened as the U.S. Postal Service continues to run an operating deficit despite increasing revenues. The number of postal clerk jobs is expected to shrink from 66,900 in 2012 to 45,700 clerks by 2022.