Via the APWU Members Unity Team: 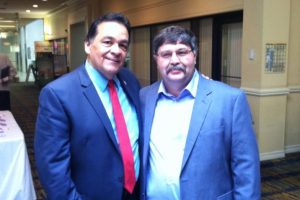 Candidate Nominations have been posted. The campaign for office has officially begun. The APWU Members Unity Team voted for and selected Vance Zimmerman as the best qualified to serve as Director of Industrial Relations.

“The office of Industrial Relations Director is too important, too critical to the interests and welfare of all crafts, to not be endorsed by the APWU Members Unity Team,” said Western Regional Coordinator Omar Gonzalez.

“Vance will restore integrity and due diligence to this office which is necessary when dealing with postal bosses that trample postal worker rights. Experienced, dedicated and knowledgeable, Vance will work hand in hand with President Dimondstein, Craft Officers Raymer, Foster, Burelson, and the rest of the APWU Members Unity Team to fight for the preservation of the Postal Service and our jobs,” said Gonzalez.

Give VANCE the Chance, to work for all of us, rank-and-file dues payers; stewards; local/state officers; Business Agents; Craft and Administrative Officers. No lip service! No boasting! Just good old fashioned hard work and union activism!

The APWU Members Unity Team seeks your support and vote for the officers listed on the Team’s campaign piece attached. Thank you!