Did someone make a killing on the pricey USPS paving job in Roanoke? – 21st Century Postal Worker

You’ve probably heard the U.S. Postal Service intends to move first-class mail operations and 200 employees from its Roanoke processing and distribution center to Greensboro, North Carolina. Did you know they recently spent almost $1 million, repaving their parking lot?
By Dan Casey – November 20, 2016
Are you ready for a postal service story that has nothing to do with lost letters, delayed deliveries, confounding examples of “return-to-sender” or other mail mishaps?

This one’s about a parking lot paving job. It was brought to my attention by reader Ron Adkins, who lives in Roanoke County. Fifty-some years ago as a young man, Adkins worked on a paving crew in Michigan. For decades, he’s lived and worked in the Roanoke Valley, where he’s been active on the political scene.

The postal service earlier this year paid almost $1 million to repave 5 acres of parking lot. Most of that was at its processing and distribution center in northeast Roanoke. The job also included paving the smaller lot at the adjacent main post office, at 419 Rutherford Ave.

Normally this wouldn’t seem like a huge deal. But the postal service has been trying to end first-class mail operations at the processing and distribution center since April 2015 and consolidate its operations into another center in Greensboro, North Carolina. Aside from that, the price seemed high to Adkins.

So I started poking around. Below is what we know, based on responses from two postal service spokespeople, two Freedom of Information Act requests by this newspaper, and a third FOIA response elicited by Rep. Bob Goodlatte, R-Roanoke County. (His office posed some questions to the postal service on behalf of Adkins.)

What’s the justification for the financially strapped postal service spending almost $1 million on paving at a facility it was trying to close?

“USPS owns this facility and this was a capital improvement since the parking lot had deteriorated and needed to be refurbished,” said Tad Kelley, a spokesman for the postal service district that includes Roanoke. 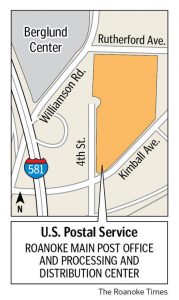 The processing and distribution center opened in 1973. The postal service can find no records reflecting full-lot repaving jobs since then, Kelly said. He also noted: “The Postal Service receives no tax dollars for operating expenses and relies on the sale of postage, products and services to fund its operations.”

Aside from that, the processing and distribution center hasn’t yet closed. Only a “partial” consolidation has occurred. The Roanoke-Greensboro merger was one of 100 around the country placed on hold in May 2015 so the postal service could gauge the impact on mail service.

Though the consolidation was expected to be completed this year, it remains on a “deferred” status, Kelley said. If it’s ultimately completed, it will affect only first-class mail operations. Parcel, priority mail and express mail operations will remain at the processing center, along with about 200 of the current 400-some employees.

“If a project is awarded at under $1 [million], the supplier is not obligated to submit a subcontracting plan or a list of subcontractors,” Hodge told me.

Fortunately, Roanoke’s not that big a town. Last week, I was able to piece together more information.

One of the subcontractors was Salem Paving. Its president, Tony Ekinci, told me his company did 90 percent to 95 percent of the job’s asphalt work as a subcontractor for Fairfax Paving & Concrete. The guy who runs the latter company, Marty Small, did not return a message I left with him Friday morning.

Fairfax supplied the asphalt, milled and paved the small front lot outside the post office, milled the much larger back lot and did the concrete work, Ekinci said. Salem Paving laid the asphalt in the back lot, around the processing and distribution center.

It’s unclear who did the striping, but “all the cost of subs and everything, it’s not more than a half-million dollars,” Ekinci told me.

He was unaware the postal service paid $942,000 for the work. But he wasn’t particularly surprised.

It’s not uncommon in the paving industry for contractors from far-away towns who don’t own paving equipment to bid jobs by looking at online maps, he said. When they win contracts, they hire local subcontractors for relative peanuts and pocket the difference between the contract price and the cost of the subcontractors and materials. Often they never even show up on site.

Regarding the postal service paving job, Ekinci said: “I don’t know who made a killing on it, but somebody did.”

He added: “It’s crazy to spend that much money on a parking lot, when you’re going to move out.”

One thought on “Did someone make a killing on the pricey USPS paving job in Roanoke?”