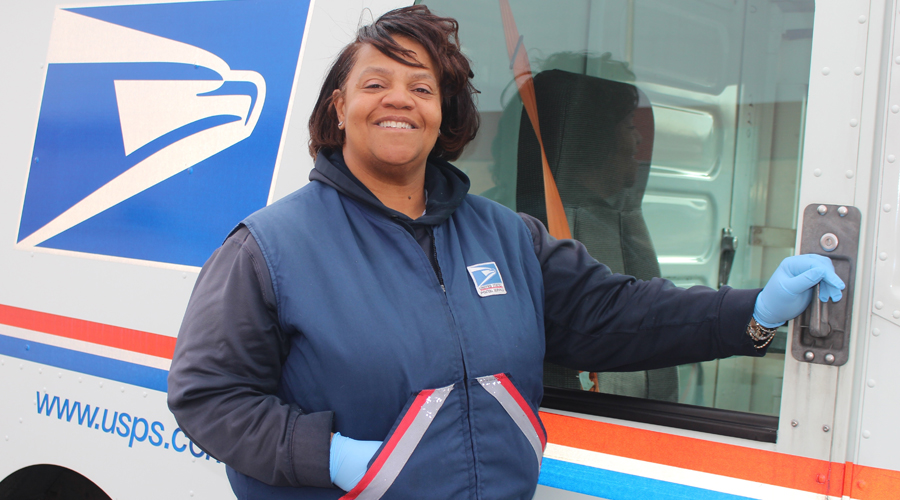 Kelly Mathaw, a Detroit letter carrier, appeared on “Live with Kelly and Ryan” this month to discuss the challenges of delivering mail during the coronavirus pandemic.

The way Kelly Mathaw sees it, we’re all in this together.

The Detroit letter carrier recently appeared on “Live with Kelly and Ryan,” the TV talk show hosted by Kelly Ripa and Ryan Seacrest, to discuss her job delivering mail and packages during the coronavirus pandemic.

During an interview conducted via Skype, Mathaw talked about the response she has received from thankful customers, including two who gave her a standing ovation, and a child who made her a card and told her to be careful.

But Mathaw expressed concern for the people she serves, too.

“I just want everybody to be safe out there,” she said during the four-minute segment, which is available on the “Live with Kelly and Ryan” website and the show’s YouTube channel.

Across the nation, USPS employees like Mathaw are receiving praise for providing an essential service during the pandemic.

After the “Live with Kelly and Ryan” interview aired April 13, Mathaw said she was nervous to appear on TV, but she felt she had a duty to the Postal Service and her colleagues, including two daughters who also work for the organization.

“I felt a responsibility to let everyone know what we’re dealing with every day,” said Mathaw, a 26-year USPS veteran. “I wanted to make sure I represented our letter carriers and the Postal Service well.”

“Kelly is a phenomenal employee,” he said. “She was the perfect selection to represent Detroit District and the Postal Service. Her attitude and approach to her work is always with safety in mind.”

Now that her TV debut is over, Mathaw is back at work, where she’s doing her part to lift the spirits of her colleagues.

“I want the message to be heard that we can get through this together and be even better,” she said.