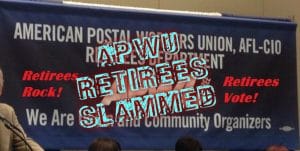 In a stunning turn of events at the recent APWU Convention, the delegates voted in alarming numbers that retiree involvement in support by retirees for active members in opposing threats of privatization and other dangerous initiatives is not needed or wanted. This became crystal clear during a spirited debate about retiree representation at conventions. Leading the attack on retirees was Eastern Region Coordinator Gallagher. Gallagher is remembered as a supporter and promoter of a return to the hated temp category of PSEs. One of the other anti’s even referred to retirees as “those people”! On the supportive side of the question, a large number of speakers in support of retirees pointed out that retirees were the backbone of the recent Staples boycott and other Union projects that saw very limited involvement by active members. One speaker stated that the Union not only wanted that support, but needed it to be successful. Those arguments did not sway the majority who obviously came to the convention with retirees in the cross hairs. Every retiree proposal was summarily rejected by the majority. For the record, the PA State APWU and Metro Local President Pugar voted against us. It was a sad day for the Union as the uninformed neophyte reactionary forces turned the clock back, nearly taking back previous retiree modest gains.