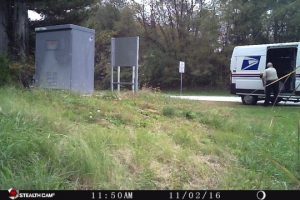 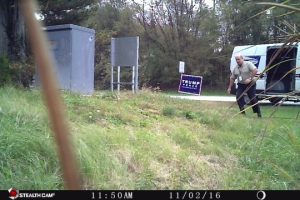 By Amy Cherry – November 4, 2016
Sign thefts are prevalent every election season, but this time a theft caught on camera allegedly involves a federal government employee.

The Delaware GOP said a homeowner installed a trail cam in a nearby tree and late Wednesday morning, after several sign thefts on his propriety. That man, who’s wished to remain anonymous, said the camera allegedly caught a man in a United States Postal Service mail truck stealing his Donald Trump sign.

He provided two photos to the Delaware Republican Party–taken about 30 seconds apart. The photos show the sign, and a man getting out of the mail truck. Thirty seconds later, the sign is gone, and the man is facing the truck with its door open and his arm inside the truck.

“We find this event disturbing on a number of levels,” said Delaware GOP spokesman John Fluharty in a written statement. “It’s one thing for candidates and political parties to disagree. It is another for their supporters to engage in illegal activity.”

Special Agent Scott Balfour with the U.S. Postal Service Office of the Inspector General told WDEL they responded to the issue as soon as it was brought to their attention.

“The individual in the photographs was identified, and will be dealt with appropriately by postal management after a thorough review of all the facts,“ Balfour said in an e-mail.

“This appears to be unacceptable behavior that does not reflect the efforts of the thousands of professional, dedicated employees in our workforce,” USPS spokesman for our region, Ray Daiutolo, Sr., told WDEL.

“While there is no question that this incident does not represent the majority of those men and women (who) serve the public at the Postal Service, we hope that USPS officials will investigate the matter and take all necessary action.”

In a statement, the GOP said the sign theft comes on the heels of what they called an “outrageous incident” where the Delaware GOP alleged Republican lieutenant governor candidate La Mar Gunn’s signs were sprayed with feces and left on his doorstep.