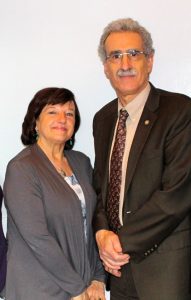 I am honored to serve as APWU’s Executive Vice President, playing a role in all that we have accomplished and serving as one of the three general officers along with President Mark Dimondstein and Secretary-Treasurer Elizabeth Powell.I am proud to be a valued member of the team. President Dimondstein and I have known each other for over 25 years and have mutual respect and trust.

I’m respectfully asking for your support in this election

I served on the National Negotiating Committee waging the fight for a new decent, union contract. As Vice President, I was tasked by President Dimondstein with communicating with affected locals and coordinating the successful national struggle against further plant closures and consolidations that impacted so negatively on our members.

I have represented APWU at many meetings and conferences; helped create A Grand Alliance to Save Our Public Postal Service; served as APWU’s liaison to the Democracy Initiative and the Postal Alliance; coordinated APWU’s relations with the Postal Regulatory Commission; investigated suspension of post offices; interacted with the Postal Office of Inspector General; implemented a national mentoring program building our fighting capacity involving new and younger workers; established an intense toolkit on stopping consolidations and closures. I was the first National officer to invest monies into five Regional Economic Studies on the adverse effects of consolidations to communities. I also set up the first communications network for the AMP sites and included webinars and conference calls to share activities and ideas with each other. We together have had two reprieves from consolidations which has also assisted PTFs to become regulars and PSEs to become career when those residual vacancies held for consolidations were released. I assisted in securing for the first time all 50 states to have activities on our First Day of Action event.

The Executive Vice President’s role is not to out shine the President but to be his/her right arm, be dependable, trusted, and find ways to help his/her vision to make a difference. I’m proud to be that person. Mark and I believe in the same vision for the membership, and it’s not necessary for me to speak out in the third person that I will do what I want to do and make a name for myself. That is not the job of Executive Vice President. We are in fact very excited to build our movement together.

I have extensive executive experience as the Arizona State President at 24 years old for over 8 years, local president in Phoenix, Arizona one of the top five largest locals in the country and local president for Newburgh New York, where our local was under the consolidation threats as well as having a plant and over 126 associate offices to represent. I have represented not just those members who file grievances but the 90% of members who don’t. Former President William Burrus gave me the APWU Leadership Award in 2009. This experience prepared me for whatever duties I may have to perform in the future. Working with our members on the workroom floor, I have experienced being in the trenches and am still an active postal employee, and as Vice President I have always been responsive to calls from our members. I have the endorsement of many officers, business agents, locals, retiree chapters and members in all the regions around the country.

I made history when I was elected the first woman Executive Vice President. I am a proud founding member of APWU Post Office Women for Equal Rights, and I am also very proud of all the women officers at the local, state and national levels who also make history each and every day. Unions around the country are inspired by our movement.

What I hope our members will do is to research where the candidates are coming from. Gregg Bell had been at headquarters for over 20 years and has had his time to make a difference, I believe Jeff Kelhert has a conflict of interest when it comes to working on the battle to stop consolidations and closures. This is not a race about having steward training schools in all the regions, writing books on grievance issues, this is a race about making a difference supporting your members under the direction of the President that members chose. You have to be a part of working within your team to grow the APWU union movement and to help each other become strong activists to save the people’s postal service. I have a proven leadership record working with President Dimondstein and I ask for your continued support.

I ask for your support for the entire Members Unity Team (apwumembersunity.com), allowing us the opportunity to carry on our work. Together we can keep our union strong!