Instead of shrinking the postal service, let’s THINK BIG about what it could be

We all know the word “valentine” from the February day when sweethearts exchange red-frilly cards. But it’s also the name of a third-century saint who literally lost his head, a ninth-century pope whose reign lasted only 40 days, three Roman emperors, a silent movie heart throb, a peppy Mexican hot sauce, the first woman in space… and a town in Texas.

I have been to that town, and it has a story to tell us about the meaning of community. It’s a haul to get there, for Valentine, population 217, is way out in Southwest Texas on a long and lonely stretch of US 90, close by the Mexican border. One of only two burgs in the far-flung desertland of Jeff Davis County, it was founded in 1882 by the Southern Pacific Railroad as a whistle stop and shipping point for area ranches. The railroad also named the place. 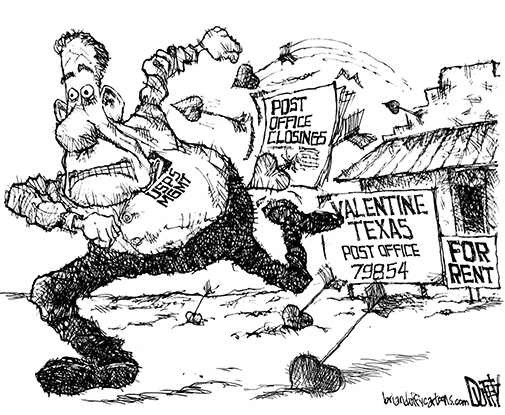 It seems that Southern Pacific’s construction crew arrived at the town site on February 14, and who would’ve guessed that in 1882 in Nowhere, Texas, there’d be a bunch of romantics on a burly construction crew? The men were apparently so touched by the felicitous beginning of a new town on the symbolic day of romance that–well, what else could they have named it? (Actually, some historians offer a less charming version, claiming the place was named for John Valentine, at the time the president of Wells Fargo and a major stockholder in Southern Pacific. But no one likes a cynic, so let’s stick with the enchanting story of Cupid’s influence.)

In fact, this tiny town has one particular attraction that truly does enchant people, drawing attention from every state and many foreign lands: The Valentine Post Office. The post office opened in 1886, shortly after the trains started running, and it has continued its proud public service ever since. Today, Postmaster Leslie Williams runs the one-room adobe PO, not only serving local residents, ranchers and businesses, but also serving thousands of customers worldwide who mail batches of their valentines to her each year. Why would they mail them to this faraway station? People around the world send their pre-addressed and stamped valentines to be re-mailed bearing this fanciful postmark: 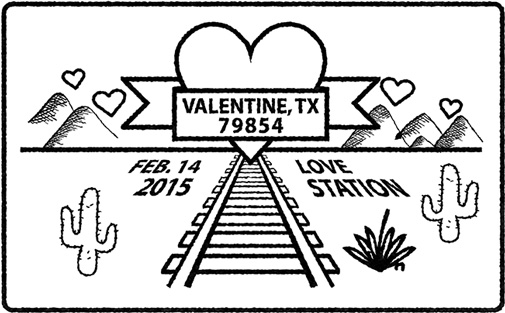 Read more: Hightower Lowdown | Cupid and his friends at the post office are fighting back against flimflamming privatizers.