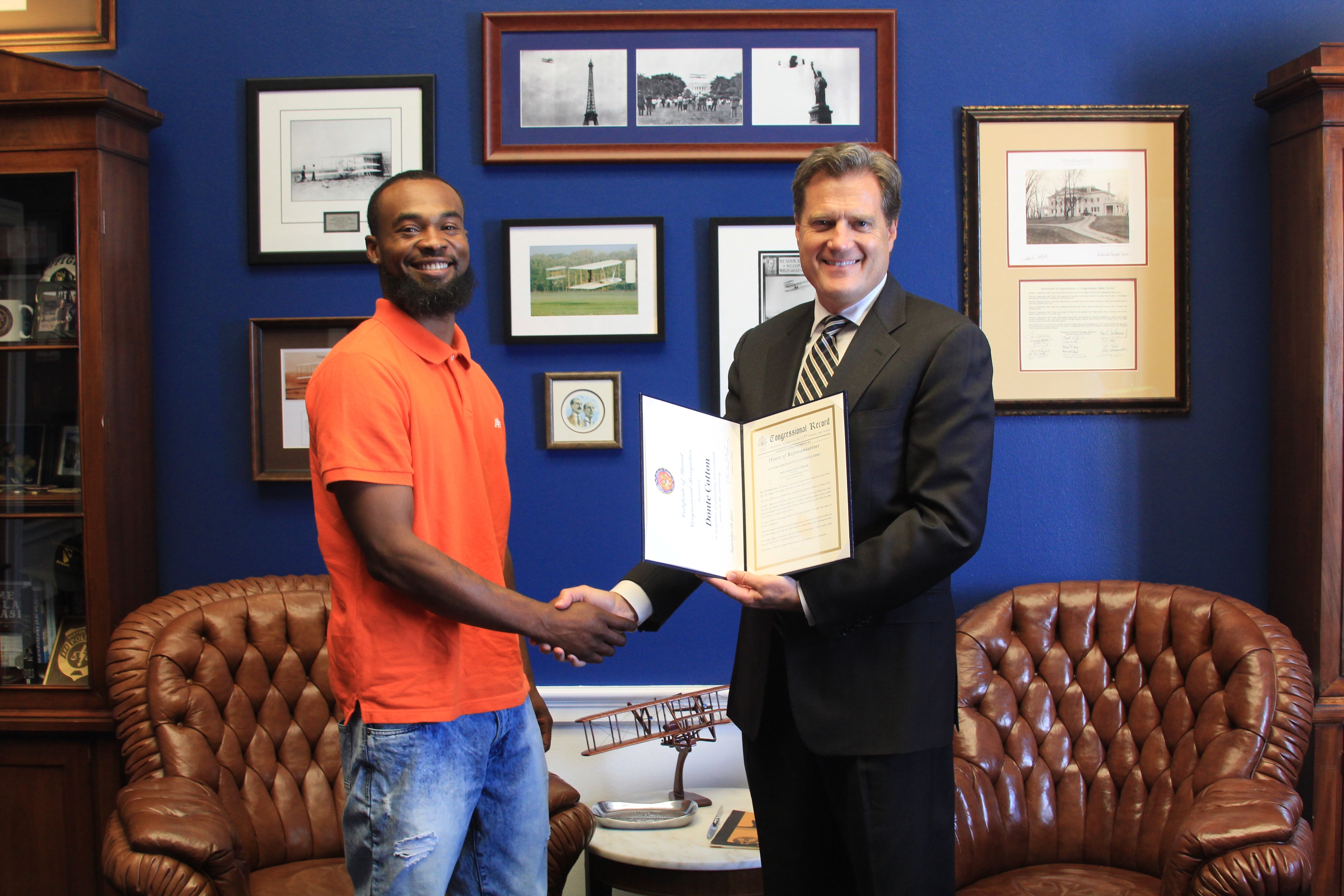 Oct 4, 2017 Press Release
Congressman Mike Turner (OH-10) today presented Letter Carrier Donte Cotton of Dayton, Ohio with a Certificate of Congressional Recognition and a Congressional Record of Congressman Turner’s speech on the House floor last week recognizing Mr. Cotton’s acts of heroism on his route. Mr. Cotton is being recognized this week by the National Association of Letter Carriers as one of its Heroes of the Year.

“Donte Cotton’s heroism is certainly something to be celebrated,” said Congressman Turner. “I am proud to recognize Donte’s true courage and thank him for his service. It’s heroes like Donte that make our community stronger.”

Congressman Turner told the story of Mr. Cotton on the House floor last week:“On April 5, 2016, Letter Carrier Donte Cotton saw an overturned car that had collided with a pole. The driver told Donte her child was inside the car. Acting on immediate instinct, Donte crawled through broken glass to rescue the baby from the car. Both the mother and the child were taken to the hospital and treated for minor injuries.

“In August of last year, Donte again found himself in the right place at the right time; again, on his letter carrying route.

“While on his normal mail delivery route, an elderly woman, whose home had just been invaded, ran up to Donte seeking help. Donte drove the woman to a nearby police cruiser, ensuring her safety.

“His courage is being rewarded this week by the National Association of Letter Carriers, which has given Donte its 2017 Central Area Hero Award.

Mr. Speaker, I would like to thank Donte for his acts of true heroism in our community.”

“People know that letter carriers represent hard work in public service,” said NALC President Fred Rolando. “Letter carriers deliver for the American people day in and day out, and are an integral part of the finest and most affordable postal service in the world. But we do much more than deliver the nation’s mail. We live and work in the communities we serve. Every day, Letter Carriers go out of their way to help the people they serve in a variety ways. Donte’s quick action in rescuing a child and mother from an overturned vehicle represents the daily reality that letter carriers are not only the eyes and ears of communities, they are often heroes in action.”