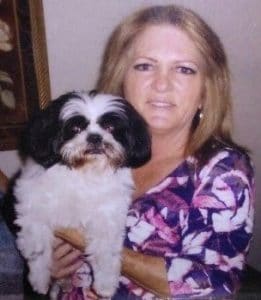 Postal worker Peggy Frank, 63, of North Hills was found dead in her mail truck in Woodland Hills on July 6, 2018. She is pictured here earlier this year with her dog, Snookie.

More than two dozen U.S. Congress members have urged the U.S. Postal Service to “strongly consider” implementing climate-control units in all their mail trucks after a postal carrier died in Woodland Hills over the summer from overheating.

U.S. Rep. Tony Cardenas, D- Panorama City, spearheaded the call “for the safety of all mail carriers” in an Oct. 26 letter to Postmaster General and Chief Executive Officer Megan J. Brennan. About 30 other Congress members also signed the letter.

The call was made less than a month after the Los Angeles County Department of Medical Examiner-Coroner announced that Peggy Frank, a 63-year-old Postal Service carrier who was found unresponsive in her non-air-conditioned mail truck on July 6, died of hyperthermia or abnormally high body temperature caused by a failure of the body to deal with the heat coming from the environment.

“No public service employee should have to bear these conditions,” the letter stated. “The safety of postal workers should be top priority for the USPS.”

A spokeswoman for the Postal Service declined to comment to the Southern California News Group. She said the agency would respond directly to the Congress members.

Federal workplace safety investigators launched a probe shortly after Frank’s death. The Occupational Safety and Health Administration has until the beginning of January to issue any citations on the matter, according to U.S. Department of Labor spokesman Jose Carnevali.

Employers are obligated to protect employees from any hazardous condition, including potential heat stress, according to the Department of Labor.