When the United States Postal Service announced in November it was consolidating the Kokomo processing center into Indianapolis, Nancy Fowler sprang into action.

A member of the American Postal Workers Union, she spearheaded the creation of the Consolidation Coalition. The USPS has consolidated roughly 300 processing centers nationally since 2006, and with plans to consolidate 82 more in 2015, Fowler and fellow postal workers wanted to get the word out to people that their mail delivery is going to slow down.

The coalition held in a rally on Nov. 14 to get its campaign started. Since then, it’s participated in community events like the farmer’s market to drum up support and gain petition signatures while raising awareness. 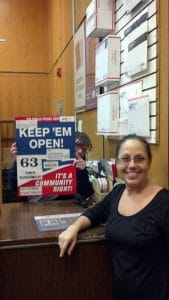 “We’d like to rally the public to contact their representatives and try to stop the consolidation,” Fowler said. “We need the community’s support. It seems to be at this point no one is listening to our input, and that seems to be the problem, even though we’re out there and have the petitions. It just seems that the post office is going to do what it wants to do, and doesn’t really care what we have to say.”

The move originally was expected to affect 29 local postal employees, including 24 clerks and five mail handlers. Since the November announcement, Fowler says some of those people have found other positions to carry mail, leaving the number at 24 people who will have to relocate once the consolidation takes place.

“Some will retire,” Fowler said. “They’ll make a choice to retire, or find a smaller office in the area, take a concession and take a 30-hour a week job to stay closer to their families. They’ll have to make some hard choices. Some of them may not be ready to retire, but they may have to think about it. We have a couple that are going to retire instead of uprooting and finding a new job.”

But, the coalition is hoping it doesn’t get that far. With the help of the Indiana University Department of Labor Studies, it is putting on a free public panel discussion at IUK’s Kelley Center Wednesday at 6:30 p.m. to start brainstorming alternative solutions to consolidation. 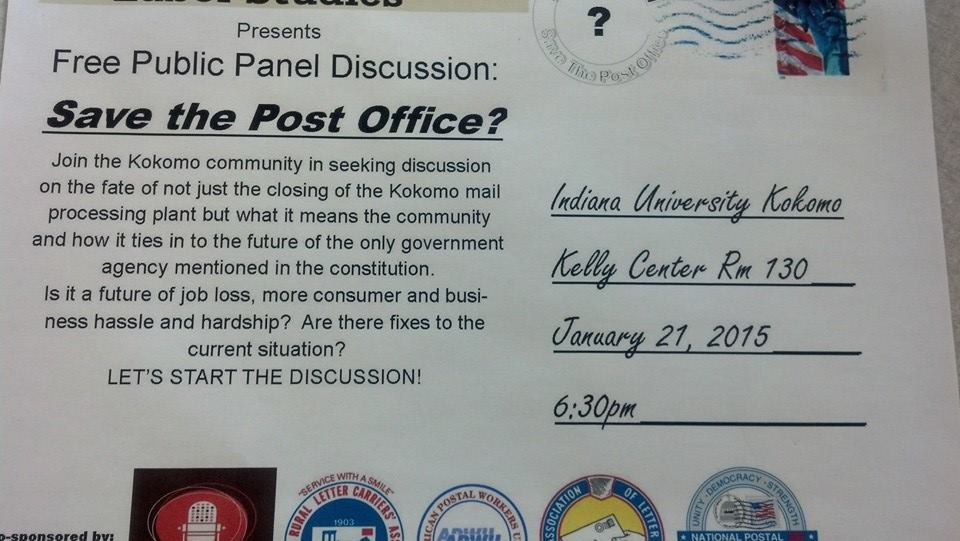 The USPS operated at a $5 billion loss in 2013 despite consolidation efforts and reductions in staff that have helped the service reduce its annual operating expenses by $15 billion since 2006.

“The unions are talking about banking services and expanding services instead of cutting,” she explained. “That would be one of the ways to go. The unions think that it’s an opportunity for the post office to grow the business, not slow down the business.”