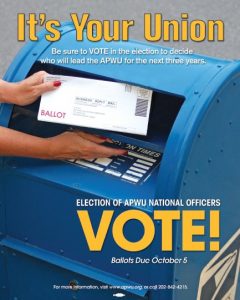 06/24/2016 – Secretary-Treasurer Liz Powell has certified the union members listed below as candidates for national union office by referendum balloting, as mandated by the APWU Constitution.

A drawing was held on June 24 to determine the order candidates’ names will appear on the ballot. Incumbent officers are listed first, with “(I)” appearing after their name.

Secretary-Treasurer Powell cast one vote for candidates in uncontested races and the National Election Committee declared them elected, in accordance with the Constitution. Their names will not appear on the ballot.