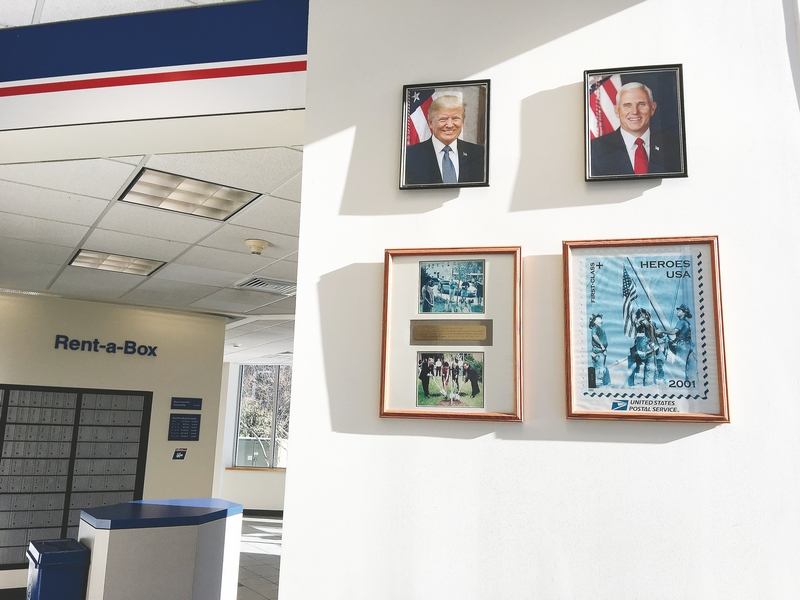 Photos of the President and vice president were recently hung in the Portsmouth Post Office, but it turns out the local tradition violates federal policy. (KIMBERLEY HAAS/Union Leader Correspondent)

By Kimberley Haas – December 26, 2017
PORTSMOUTH — A spokesman for the United States Postal Service said Tuesday that photos of President Donald Trump and Vice President Mike Pence were to be immediately removed from the lobby of the Portsmouth Post Office.

In July, Republican activist Matt Mayberry complained that photos of Trump and Pence had not been placed on a wall near the rented mailboxes, where portraits of Barack Obama, Joe Biden, George W. Bush and Dick Cheney had been displayed while they were in office.

Mayberry, who works in Portsmouth, said at the time he was disappointed that the local tradition of portraits hanging in the post office stopped.

Last week, when he noticed the pictures of Trump and Pence up for the first time, Mayberry was thrilled.

“I went to drop off Christmas cards, and I looked up and they were there,” Mayberry said. “That’s all I wanted.”

But USPS spokesman Stephen Doherty said post office policies prohibiting the photographs or likeness of any elected official have not changed in recent months. On Tuesday afternoon, Doherty said he looked into the matter and discovered a well-intentioned local employee put up the photos not understanding national policies.

Doherty said he was assured the photos were removed.

It also bans the written use of “Merry Christmas” or “Happy Hanukkah” inside post offices, instead directing postal service employees to use “Season’s Greetings” or “Happy Holidays.” It allows for “secular holiday decorations” such as evergreen trees, as long as nonreligious ornaments are used and a menorah — though it must be displayed in conjunction with other seasonal items. Santa Claus made it on the nice list, but nativity scenes and the Star of David are banned.

“Now, politics are going to come into play because they made the decision to not hang up pictures of Trump and Pence,” Mayberry said.

Mayberry said he would support having presidential portraits hung in the post office lobby even if Hillary Clinton had won the 2016 election.

“The President is the President, regardless of who it is,” Mayberry said.