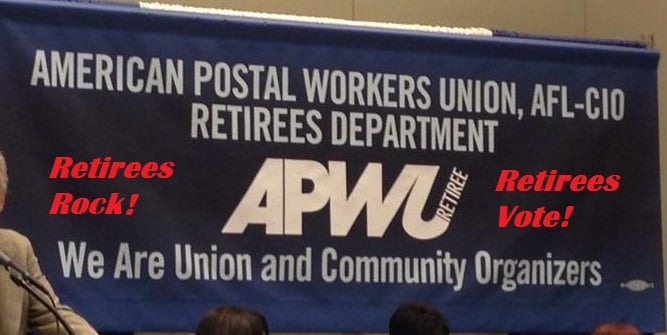 By Paul Browning, President, Michigan State Retiree Chapter
There appears to be two (2) disconnects between still working members and retiree members that are a basis for prejudice against retirees concerning increased voice and vote for retirees at APWU National Conventions. (Note that I use the term “still working members” INSTEAD of “active members” AS MANY RETIREES ARE ACTIVE IN THE APWU). We participated in the Staples boycott, we are active politically with our Congressional Representatives, we work within our communities, families, friends, and neighbors to educate them about the necessity of maintaining the USPS as opposed to privatization. RETIREES ARE ACTIVE!

The FIRST DISCONNECT is the amount of dues retirees pay vs. that of full dues paying members. But lets look at where ALL of the money goes:

1.) Full dues paying members support EXCLUSIVELY over seventy (70) full time National Officers with their office staffs and travel expenses PLUS Arbitration Advocates and APWU members on “special assignments”. Retiree dues supports only one National Officer – the Retiree Department Director – and the five (5) National Convention Retiree Delegates who receive no compensation other than expenses once a year for the pre-Convention Retiree Conference/National Convention and the Retiree Conference in off Convention years. These yearly Conferences serve as the ONLY opportunity for retirees from around the country to get together and express their views and opinions. Think of them as sort of the equivalent of the APWU National Presidents Conferences (NPC) held four (4) times yearly. And while Locals have the funds to send their Presidents to the NPC, retiree chapters simply don’t have the money to meet more than once a year.

2.) According to the APWU National Secretary-Treasurer reports in the 2014, 2016, and 2018 National Convention books, Retirees paid almost 3.4 Million dollars ($3,400,000) in per capita dues with the National Union rebating approximately six hundred fifty thousand dollars ($650,000) to Local and State Retiree Chapters. Our National Union retained well over two and a half million dollars ($2,500,000) for the APWU General Fund-money kicked into the big pot for everyone to use. Even with Retiree Department expenses, we are still looking at millions of dollars retirees pay in their dues to contribute to expenses for still working members. The Retirees Department is self-sustaining, but we are glad to contribute to the greater good. It is ONE FOR AND ALL FOR ONE!

3.) One other note about retiree dues and voting rights – where else is my right to vote dependent upon how much tax I pay?? When I go to my local polling place to vote whether it be on a school millage, zoning rule, City Charter amendment, etc. I get to cast my democratic vote with no one asking me how much I pay in taxes.

The SECOND DISCONNECT and reason for prejudice against retirees having increased Convention voting rights is that we are not on the workroom floor, working Maintenance or MVS duties. Lets dissect that rationale and its faults:

4.) Many National Officers are retired from USPS and haven’t worked a Craft job in years. At the 2014 APWU National Convention, APWU Human Relations Director Sue Carney asked the Chair from a floor microphone how many of the APWU National Executive Board were retirees. The response from Chair/President Dimondstein was “All but two” and that is out of thirteen (13) NEB Members! But we trust these retirees to run our Union and LISTEN to the membership. As the Central Region Retiree Convention Delegate (from Michigan), I sat on the Convention floor with my still working Brother and Sister Delegates from Michigan. I listened to them just as our RETIRED NATIONAL OFFICERS LISTEN TO THE MEMBERSHIP.

5.) Another reason cited by some as to why retirees shouldn’t have increased vote is they have no stake in Contract/Craft issues. Well, the APWU is an INCLUSIVE UNION. At a National Convention, Clerk craft and Maintenance delegates get to vote on Motor Vehicle Craft resolutions. MVS and Maintenance delegates get to vote on Clerk Craft resolutions. etc. Delegates not directly involved with a specific resolution trust the delegates who are affected for advice and explanations on these resolutions and vote accordingly. Why can’t Retiree delegates be trusted in the same manner?

6.) Whether an individual has worked six months at the Post Office or retired after thirty years, We all have a vested interest in our Union. Success for the APWU in Contract, Legislative, and Retirement issues are all tied together. Failure to achieve fairness in any one of those areas has repercussions for all. If still working members get the shaft, it will eventually come back to have a negative affect on retirees and vice versa-if retirees get screwed over, it will affect those members still working when they retire.

7.) When APWU National President Dimondstein speaks of almost 200,000 APWU members, he makes no differentiation between still working members and retirees. We are APWU members and deserve more than five (5) votes out of twenty five hundred (2,500) at a National Convention.

When Brother Al LaBrecque and I originally wrote in 2016 the Constitutional change resolution giving retirees a 1-100 Retiree Chapter member Convention Delegate voting strength (as opposed to full dues paying members 1-25 Local member vote) it was our intent to limit the objections of full dues paying members with a compromise that would still recognize retirees for their contribution yet appease any fear that “Retirees would take over the Union”.

As Union representatives, we know what negotiations/give and take are all about and that is what the 1-100 Retiree vote is all about. We are merely seeking a middle ground to give all the parties involved-full dues and retiree dues paying members-a satisfactory solution. We believe the 1-100 vote achieves such. Practically speaking, passage of the subject resolution would not make for a huge number of retiree delegates on the Convention floor as Retiree Chapters simply could not afford to send any large number of delegates.

Nonetheless, the presence of some dozens of retiree delegates would give us a voice and vote in Solidarity with our still working brothers and sisters and give retirees the recognition they deserve for their role in building the APWU to where it is today. As the subject resolution states in one of the “where-ases” RETIREES COLLECTIVELY PAID OVER (1,000,000) YEARS WORTH OF FULL DUES. WHERE WOULD THE APWU BE WITHOUT ALL THOSE YEARS WORTH OF DUES MONIES?