Web News Article #: 077-2015
04/07/2015 – The labor movement will observe Workers Memorial Day on Tues. April 28, to commemorate those who have been killed or injured on the job and to revitalize the fight for workplace safety.

Workers Memorial Day coincides with the anniversary of passage of the Occupational Safety and Health Act (OSH) more than 40 years ago, which promises every worker the right to safe working conditions.

Each year, thousands of workers die and millions more are injured or sickened from dangerous conditions on the job. Many employers routinely cut corners and violate the law, putting workers at risk and sometimes costing lives. Workers who report hazards and injuries are often fired or disciplined.

In 2014, at least seven postal workers lost their lives on the job and tens of thousands more were sickened or injured. Four letter carriers were killed in motor vehicle accidents and falls.

On Oct. 8, Motor Vehicle Service Craft employee David Zimmerly was killed while repairing a truck at the Vehicle Maintenance Facility in Hicksville, NY.

On Sept. 25, Ernesto (Tito) Jordan, a Maintenance Craft employee for 25 years, was performing window washing duties at the Mid-Town Station in New York City when he fell from his scissor lift. His injuries were fatal.

Postal worker Samuel Macasieb lost his life in August after he lay dying for nearly an hour on the floor of his Bay Area processing plant before paramedics arrived.

It’s unclear how Macasieb, 59, was injured. His co-workers found him on his back, barely conscious, with blood coming from his mouth and ears.

But USPS protocol prohibited them from calling 911. Instead, they contacted several supervisors and managers, who alerted postal police – the only people who were allowed to call 911. A local TV station reported that more than a dozen employees from the Oakland facility said they were routinely instructed not to call 911.

By the time paramedics arrived, Macasieb had been incapacitated for 53 minutes. His family took him off life support 10 days after the accident.

Following inquiries from the media and the APWU, USPS management changed the 911 policy. 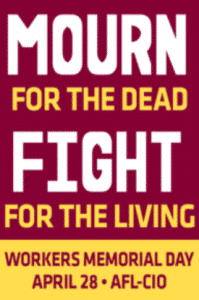 “Mother Jones, the well-known labor leader in the early 1900s is famous for saying, ‘Mourn for the dead, fight like hell for the living,’” noted APWU President Mark Dimondstein.

“I urge you to do just that: Join with co-workers to participate in Workers Memorial Day events in your area and fight for safety on the work floor – fill out Form 1767 to report safety hazards, file grievances, report unsafe conditions to OSHA, circulate petitions and stand up for a safe work environment,” he said.

For more information about Workers Memorial Day events in your area, click here.