April 29 Deadline for Workers Not Listed or Whose Listed Amounts Were Wrong
Web News Article #: 068-2016
03/29/2016 – The Postal Service notified the APWU that management has almost completed the paperwork to correct payment amounts due to employees for the initial portion of a $56 million monetary settlement of grievances protesting managerial personnel performing Clerk Craft duties in small offices. Approximately 300 corrections are outstanding.

Employees who were identified for payment but received incorrect amounts do not have to do anything. The national union is monitoring the payments to ensure that the correct amounts are paid. (Retirees’ checks will be sent to the last office they worked at before their retirement, but may be sent later. Retirees are encouraged to call their work location to see if their checks are available after April 22 or May 6.)

Employees can verify the amount they are due by clicking here and entering their Employee Identification Number (EIN). Employees who were on the rolls as Part-Time Flexibles (PTFs) or who occupied Non-Traditional Full-Time (NTFT) assignments in Level 15, 16, and 18 offices during the period from May 7, 2011, to Dec. 5, 2014, are eligible for a portion of the payout. Each week employees were on the rolls during that timeframe counts as one share; each share is worth approximately $26.23.

Eligible employees whose names did not appear on the list or whose listed payment amounts do not match the amount employees can document they are eligible for must complete a Payment Request Form by April 29 to ensure they will receive payment. Instructions for completing the form can be found in the Payment Request Form Submission Protocol. If you submitted this form at any time since the process began in November 2015, there is no need to submit another one.

Employees who were not listed or whose amounts were wrong must complete Section A and submit the form and any supporting documents to their current local or state union. Employees in this group can assist the local or state union by downloading all their PS Form 50s for the payout period, May 7, 2011 to Dec. 5, 2014. Instructions for retrieving the forms can be found here.

Eligible retirees who were not listed or whose listed amounts were wrong also must complete Section A and submit the information to the local or state union that represents their last office of employment.

Locals and state organizations will assist employees and retirees in gathering evidence when necessary, and will complete Section B of the form and forward the form to National Business Agents, who will verify the amount.

National Business Agents will complete Section C by entering the total amount due or the difference between the amount listed and the amount owed.

The national craft director and assistant directors will not respond to inquiries directly. Inquiries will be referred to locals and state unions. 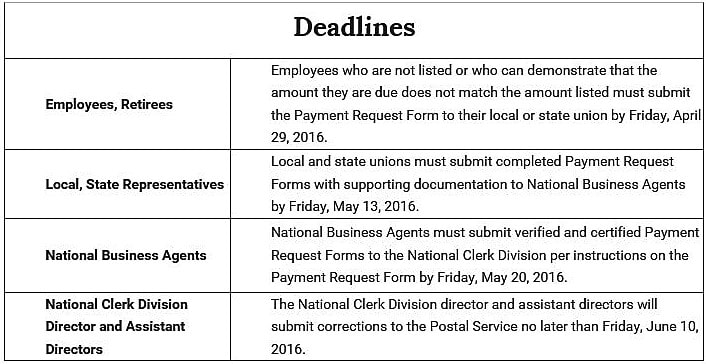 Failure to follow the process described above and in the referenced documents could result in the denial of payment as the next payment will exhaust the remaining monies under the Global Settlement Remedy for violations of Article 1.6.B of the Collective Bargaining Agreement.