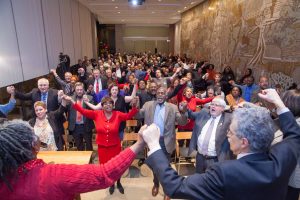 A round of “Solidarity Forever” closed the rally. (click image to enlarge)

Web News Article #: 033-2015
02/18/2015 – Over a hundred labor union members, leaders and activists participated in a spirited rally on the eve of APWU contract negotiations at the AFL-CIO headquarters on Feb. 18.

Lively chants of “We want a contract!” and “What kind of power? Union power!” rose up between passionate calls for solidarity.

Actor-activist Danny Glover recalled how the Postal Service offered his parents a “different kind of life,” with better opportunities for growth. He called their struggle a “commitment to change,” for the better – exactly what the APWU is fighting for.

“You are standing up and fighting for not just yourself, but all workers,” said Liz Shuler, secretary-treasurer of the AFL-CIO. “What you do at the bargaining table will help every worker in this country ­– and I know you are up for it!” 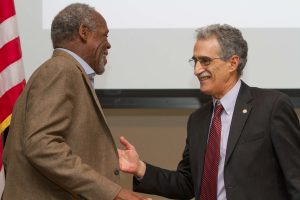 Jim Hightower, editor of the Hightower Lowdown and former commissioner of the Texas Department of Agriculture, came from the Lone Star state to show his solidarity.

“I’m here for the small farmers and small business owners. I’m here for the inner-city people…who want to see the Postal Service not shrink, but expand,” he said, calling the post office “the heartbeat of the community.” 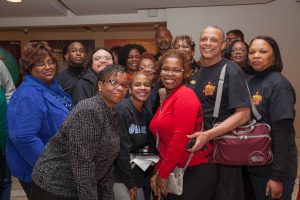 APWU members are ready for negotiations (click image to enlarge)

Larry Cohen, president of the Communication Workers of America (CWA), said that he would be with the postal workers “every step of the way, saying ‘No’ to plant shutdowns.

“The APWU is going to say to our government and our president, ‘It’s our turn!’” Cohen added. “We are standing up and we are fighting back!”

“We are coming at the Postal Service as one movement and we are saying ‘Hell no!’” said Terry Melvin, president emeritus of the Coalition of Black Trade Unionists. “You are our postal workers and we believe in you.”

Elise Bryant of the Labor Heritage Foundation closed out the rally, leading attendees in a rousing rendition of “Solidarity Forever.”

via Union Members Bring the House Down at Pre-Negotiation Rally | APWU.