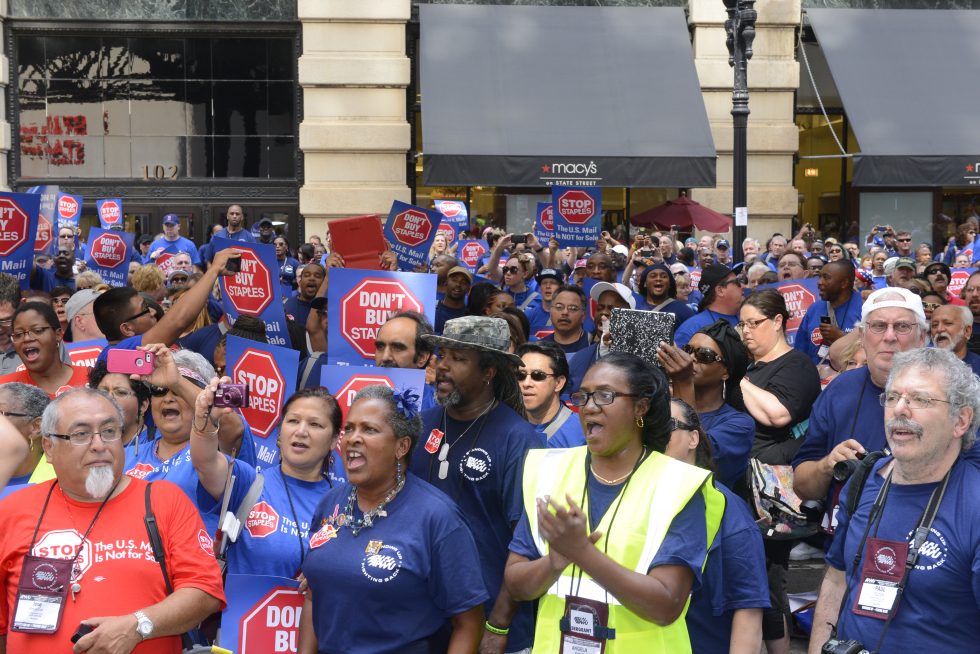 Web News Article #: 012-2016
01/29/2016 – A document unearthed in proceedings before the National Labor Relations Board (NLRB) reveals why the APWU is adamant that the Postal Service’s deal with Staples – and others like it – must be stopped.

The March 26, 2012, document exposes the secret privatization recommendation a Postal Service consultant made to USPS management: Eliminate most retail facilities throughout the country, along with the work of APWU employees.

The document is covered by a “protective order” that prohibits its disclosure, but the Administrative Law Judge presiding over the case has ruled that the contents can be summarized and brought out from behind the veil of secrecy.

The judge’s order says, “The document was not prepared by the [USPS] and does not, on its face, reveal whether the [USPS] adopted any of the proposals contained in it.” As the APWU sees it, the deal with Staples is consistent with this recommendation.

“The USPS claim that the Staples deal is about providing customers with better access is a hoax. It is clearly a privatization scheme to transfer postal services – and our work – to the private sector,” APWU President Mark Dimondstein said.

“This document proves we are on the right track and should double down to stop this dirty deal in its track. Continue the boycott of Staples and Quill.com and continue to encourage our co-workers, families and friends to do the same.”