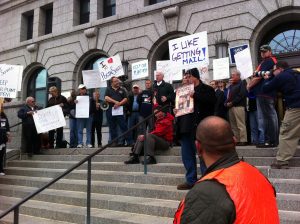 01/13/2015 – When postal officials lowered “service standards” on Jan. 5, they didn’t just slow down America’s mail: They set in motion a process that is causing serious disruption in the lives of thousands of hard-working postal employees. As management reconfigures mail processing, they are also causing massive reassignments and shift changes for workers.

“It’s an outrage,” said APWU President Mark Dimondstein. “Postal bureaucrats are virtually eliminating overnight delivery of first-class mail and periodicals, slowing down all mail delivery across the country, and jeopardizing the future of our great national treasure. At the same time, they’re causing major upheaval in the lives of workers.

“In implementing the changes, they ignored the pleas of 51 senators and 178 members of the House, who asked for a one-year moratorium on the reduction in service standard and the closure and consolidation of mail processing facilities,” Dimondstein said. “They disregarded the warnings of the USPS Office of Inspector General, the Government Accountability Office (GAO) and the Postal Regulatory Commission, which raised serious concerns about delayed mail. Management even overlooked the concerns of some mailing industry trade associations.

“They also ignored the demands of postal unions and the hundreds of thousands of workers we represent,” Dimondstein added.

“Postmaster General Patrick Donahoe is ending his reign the way he began – undermining, degrading, and weakening the public Postal Service he was supposed to lead, and spitting in the eyes of tens of thousands of proud postal employees.
Responsibility for the upheaval in the lives of postal workers rests squarely on his shoulders,” the union president said.

“The APWU has fought long and hard to stop the destructive changes from taking effect, and we intend to keep up the fight. Our rallying cry, ‘Standing Up and Fighting Back,’ doesn’t mean we will win every battle. But if we don’t wage the struggle, we are guaranteed to lose,” he noted.

“The struggle must continue on many fronts,” Dimondstein said. “The APWU – from the national officers to members on the work floor – must renew our efforts to win support for postal legislation that restores the previous service standards. We must fight for better service and better jobs when contract negotiations get underway in February, and we must act in concert with our many allies who are demanding a vibrant public postal service for generations to come.”