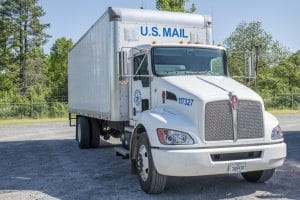 09/12/2017 – Recently, APWU members employed by Salmon Companies voted to ratify a collective bargaining agreement (CBA) with the company. Salmon Companies is the largest ground transportation supplier to the United States Postal Service (USPS). Truck drivers for the private-sector company are part of the Support Services Division. The contract covers locals from Dallas, TX; Shreveport, LA; Little Rock, AR and Memphis, TN. The new CBA was ratified by over 75% of voting members.

“Language regarding employee bumping rights, bidding process, extra-board procedures, working rules, safety and equipment, and discipline were all revised and improved from the original contract. In particular, the extra-board and bumping rights were changed to benefit each specific terminal,” reported Support Services Division Director Steve Brooks. “We made increases to the layover pay for drivers who are unable to complete their routes within their mandated 11-hour driving limit, as well any non-SCA (Service Contract Act) duties.

“Although we were not able to make adjustments to the cost of the health care benefits, we were able to design an opt-out clause for those members who can demonstrate they are/will be covered under a spouse’s qualified group plan,” Brooks continued. “The guidelines are provided for in the Affordable Care Act.”

The negotiating committee, made up of Support Services Division leadership and drivers from each unit across the country, participated in several bargaining sessions with the company before and after the previous contract’s expiration on March 1, 2017.

“This contract is an improvement from the previous agreement. It will better the drivers’ lives and we will build on it moving forward,” concluded Brooks.