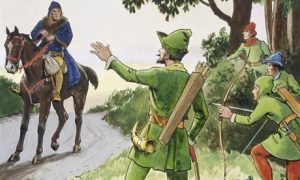 The bill could generate up to $350 billion per year by requiring brokers, bankers and the wealthy to pay a small fee for stock trades and other financial assets – much like the tax we pay when we buy clothing or groceries. The revenue generated could bring needed relief from unemployment, medical and student debt, and housing foreclosures.

Those with interests on Wall Street are going to fight the bill, so the union is urging members to show support.

via Robin Hood to the Rescue! | APWU.