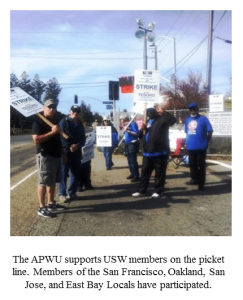 02/27/2015 – On Feb. 1, for the first time in 35 years, the United Steel Workers Union (USW) announced work stoppages at oil refineries in five states to protest hazardous conditions facing workers and residents who live in nearby communities.

Unsafe conditions are caused by insufficient staffing, excessive overtime, and almost daily fires, emissions, leaks and explosions that put tens of thousands of people in danger.

There has been an increase in respiratory, cardio and other serious health problems in the aftermath of accidents caused by unsafe practices at refineries, the union reports.

A World of Hazards

The slightest mistake or malfunction at an oil refinery can harm workers and the surrounding community. After an explosion at a BP refinery outside Houston in 2005 killed 15 workers and injured nearly 200, regulators found BP responsible for willfully violating safety protocols – including assigning workers to work mandatory overtime.

Dave Martin, vice president of the local striking the Marathon refinery in Catlettsburg, KY, explained that people working overtime don’t always make the best decisions. To avoid another accident, the USW is trying to improve safety protocols and prevent the subcontracting of maintenance work during the bargaining sessions.

However, the union said that managers often skirt existing rules, preventing workers from having days off after working more than 10 consecutive days. When employees leave, managers aren’t filling the empty spots and are instead forcing others to pick up the slack with overtime, workers said.

The APWU supports this effort and calls on members to stand with USW members on picket lines to offer solidarity in this fight.

Here’s a list of facilities currently participating in the strike: