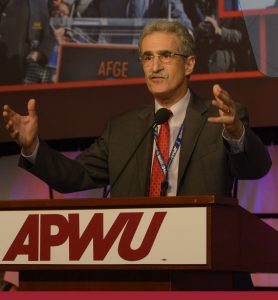 08/25/2016 – “Negotiations come down to power,” APWU President Mark Dimondstein told delegates at the union’s National Convention at a meeting on the new contract. The results of negotiations reflect how much power and leverage each side can assert, he said.

With that in mind, as part of the fight for a good contract, union leaders sought to strengthen our members’ power on the work floor and build support for our struggle in the labor movement and beyond.

The new Collective Bargaining Agreement is the result of a two-year fight. “You were all involved in it,” Dimondstein told the assembly at a special Saturday meeting.

Throughout the two-year struggle, the union was always preparing for the possibility that our contract dispute would end up in arbitration, he said.

“Arbitration is risky,” Dimondstein pointed out, because “everything gets thrown up into the air” and because “one person decides our fate.” The APWU contract covers more workers than any single Collective Bargaining Agreement in the country, so the result – good or bad – would affect the entire working class.

“That’s not a great place to be,” Dimondstein said. “If there’s less money, that’s leverage for management.”

But the APWU also had significant strengths:

“We developed a strong strategy and did a lot of creative things. We had the contract campaign and Contract Action Teams. Most of you were part of it,” Dimondstein told delegates.

“Don’t underestimate what you did. We sent management a message.” Every time workers put on a sticker, a button, a T-shirt, or sent in a selfie showing union pride and solidarity, it became “part of our leverage and our collective strength,” he added. 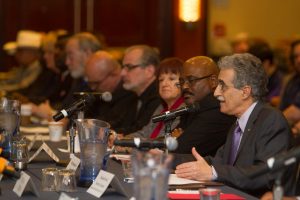 Dimondstein also credited labor solidarity for the union’s success. “We had a lot of unions standing with us, including on the opening day of negotiations. Brother Fred Rolando of the Letter Carriers sat with us at the table on the opening day. We had probably seven or eight unions with us on opening day.”

“That sent management a message too,” Dimondstein said. The union’s guiding principle was “no concessionary bargaining.”

Instead, we accomplished a great deal: