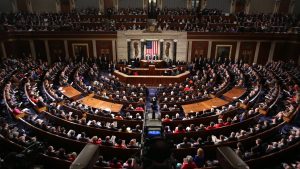 07/20/2016 – A House committee has approved two important postal measures that may be considered by the full House in the fall. The Oversight and Government Reform Committee adopted the Postal Service Reform Act of 2016 (H.R. 5714) and the Postal Service Financial Improvement Act (H.R. 5707) in a voice vote on July 12.

“While the APWU is encouraged by the bipartisan manner in which the committee has approached postal reform, we are troubled by the inclusion of a number of provisions that we believe will undermine efforts to secure a robust future for the Postal Service,” said APWU President Mark Dimondstein. “Unless these provisions are revisited, improved, and changed during consideration of the bill by the full House of Representatives, the APWU will be unable to endorse the legislation.”

The bill addresses the pre-funding requirement of the Postal Accountability and Enhancement Act of 2006 (PAEA), which has wreaked havoc on Postal Service’s finances, through “Medicare integration.” Medicare integration would establish a postal-only health plan in the Federal Employee Health Benefits program that would automatically enroll most Medicare-eligible postal workers in Medicare Parts A, B and D.

Approximately 80 percent of Medicare-eligible postal workers and retirees have enrolled voluntarily because most people who have coverage under an FEHB plan and Medicare save money in the long-run.

“We believe an opt-out provision is essential. We also believe it is paramount that input from unions, Medicare, Social Security and the Office of Personnel Management (OPM) be included in postal management’s process of providing Medicare education to postal workers,” Dimondstein said.

The bill also contains a provision that would convert door delivery to curb-side delivery or cluster boxes, which would represent a major reduction in service and undermine opportunities for growth.

With regard to postage rates, the APWU believes the proposed language fails to offer an appreciable improvement. As written, the bill would skew rate reviews by the Postal Regulatory Commission (PRC) toward lower rates and away from sustainable income needed by the Postal Service. Further, the bill does not go far enough to restore the lapsed “exigent” rate increase that was implemented in January 2014 and eliminated in April 2016. The legislation restores only half of the increase.