A Call To Action

Recent statements from Trump and PMG Delay* and concurrent developments throughout the Postal Service should have even the most sanguine disbelieving rank and file on edge. For too long too many have pooh poohed the alarms about privatization threats coming from the Trump administration and his minions. The current trend is to look only to national to oppose our adversaries. A word of advice to our active colleagues – – –GET OVER IT! THIS IS NOT THE TIME TO REST ON YOUR LAURELS, IF EVER THERE WAS A TIME. NOW IS THE TIME FOR MASS ACTIVITY TO ALERT THE PUBLIC ABOUT WHAT IS GOING ON, AND THE DANGER THAT THEIR POST OFFICE MAY BE LOST. NATIONAL IS LEADING THE WAY WHILE HOBBLED BY BEING SHUT OUT FROM THE UNION HEADQUARTERS BY THE CORONA VIRUS. NEVERTHELESS, PRESIDENT DIMONDSTEIN HAS BEEN ALL OVER THE MEDIA GIVING INTERVIEWS AT MAJOR NEWS OUTLETS. BUT THAT ISN’T ENOUGH!
(*We intentionally misspell the PMG’s name since he is the reason for mail delays.)

The public is rising to the occasion, by demonstrating spontaneously at post offices all across the nation. But that also isn’t enough. A tidal wave of rank and file presence demonstrating at the post offices where they work is desired and badly needed. Some Locals have risen to the occasion when called by national for group activities. But too many still haven’t gotten the message. Despite the activities by a few Local leaders, in way too many cases, the rank and file are still are not responding in massive numbers. 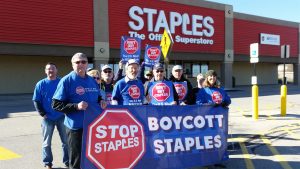 In our time when demonstrations were held at the GMF, California Avenue was shut down because there were so many marchers. And while the stakes were high in those days, the actual existence of the Postal Service was not at stake, but it is now! Also, when we struck in 1970, Grant Street and 7th Avenue were disrupted as hundreds lined sidewalks.