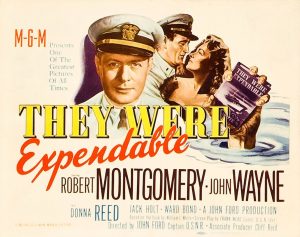 In 1945 a movie titled, They Were Expendable, was released. The subject matter was about the PT (Patrol Torpedo) boats that were used in WW II which were expected to be sacrificed in combat with the Japanese enemy. Those small boats and their crews were given zero chances of survival. President John Kennedy was the skipper of PT 109. His boat was shot out from under him. He became a hero for rescuing his crew. by swimming miles under enemy fire for several days before rescue. Kennedy suffered injuries that bothered him for the rest of his life, shortened as it was.

Fast forward to the present. As this is written over 115,000 Americans have succumbed to the corona virus. By the time a handle on logistics was developed, it became known that seniors, and especially seniors with serious health conditions, meaning most seniors, were at greater risk of death if the virus was contracted. In response to this threat, unprecedented actions were taken by shutting down much of the economy and developing protocols to try to avoid infection. Chief among these were frequent hand washings, avoiding contact by six feet from other persons, wearing masks that cover the mouth and nose when around others, and remaining in our homes. By any measurement those actions were having a positive effect. Incidents of infection and death were reducing.