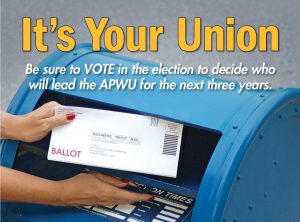 The APWU Election of Officers is underway. While there are numerous resident and field officers to be elected, this report will concentrate on only those running for President, since that is the most important office, and as this is written and published before candidates are officially announced, it is widely suspected that the office is being pursued by four disparate candidates.