Web News Article #: 130-2016
06/23/2016 – In a major ruling in favor of the APWU issued on June 15, the National Labor Relations Board (NLRB) ordered the Postal Service to immediately provide the APWU uncensored copies of documents about the pilot program that established postal counters inside Staples stores – information the APWU first requested in 2013. 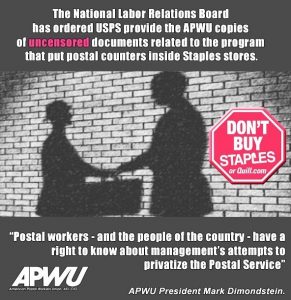 Noting that the Postal Service has a “rich history of responding to information requests with denials and delay,” the Board said that it would “not condone the [Postal Service’s] unlawful conduct by allowing it to delay any longer in producing the information.” The APWU first requested the information in 2013.

Under the order, the Postal Service must turn over information regarding its relationship with Staples, including copies of agreements and correspondence between the USPS and the office-supply company; records of any special deals and payments between them, and training material the Postal Service provided to Staples about how to perform the work.

Perhaps most importantly, the Board ordered the Postal Service to release records of its internal deliberations regarding the decision to subcontract APWU work to Staples.

Lifting the Veil of Secrecy

“This ruling will go a long way toward lifting the veil of secrecy that has shrouded the Postal Service’s deal with Staples,” said APWU President Mark Dimondstein. Although the Postal Service released thousands of pages of documents in response to earlier APWU requests and NLRB rulings, it withheld information it claimed was “proprietary.”

“Postal workers – and the people of the country – have a right to know about management’s attempts to privatize the Postal Service,” Dimondstein said. “This NLRB decision will advance that goal.”

The ruling affirmed and expanded on a 2014 decision by NLRB Administrative Judge Eric M. Fine, who found that the Postal Service violated the National Labor Relations Act when it refused to provide information to the APWU. Fine ordered the Postal Service to turn over most of the documents but he accepted management’s claim that some information was “proprietary” and permitted the USPS to obscure such information and/or restrict the union’s right to disclose it.

The APWU appealed the portion of the ruling that allowed the Postal Service to redact or restrict disclosure of the information. In the June 15 ruling, the Board ordered “immediate and unredacted production of all documents requested, without any confidentiality agreement.”

The decision could have a significant impact on a separate case pending before the Board regarding the Postal Service’s refusal to bargain with the union over the subcontracting of postal work to Staples.

“The APWU calls on Postmaster General Megan Brennan to comply with the Board’s ruling rather than engaging in delaying tactics by appealing the decision to the courts,” said APWU President Mark Dimondstein.