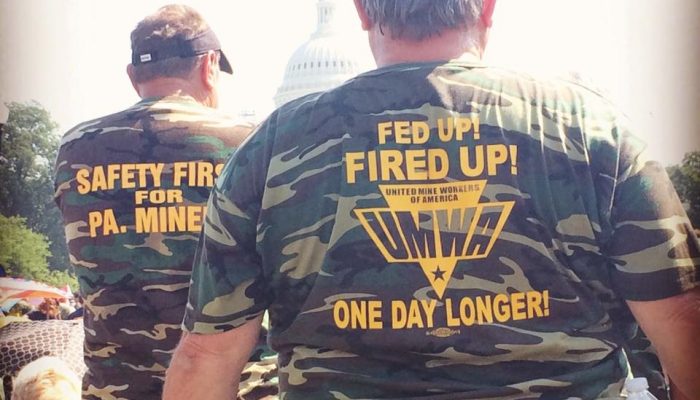 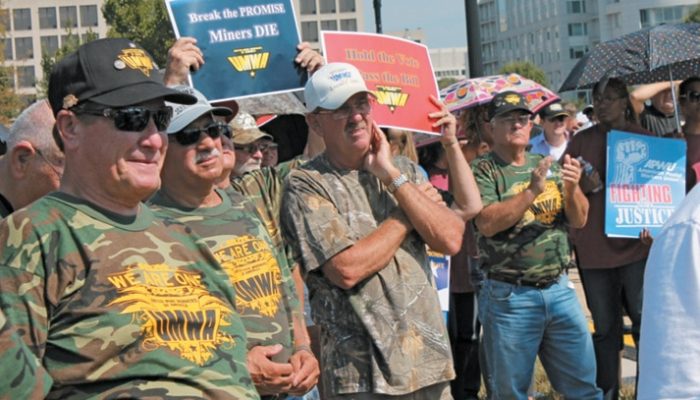 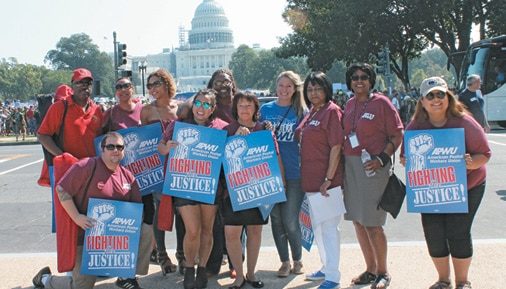 Web News Article #: 43-2017
05/05/2017 – On May 4, Congress passed legislation providing for 22,600 retired coal miners, widows and dependents to have the health care they were promised by the federal government and earned through going into the mines for decades to power the country.

The members of the United Mine Workers of America (UMWA) have been rallying and lobbying Congress to secure their promised retirement benefits since Patriot Coal’s bankruptcy filing in 2012. On Sept. 8, 2016, APWU officers and staff stood in solidarity with over eight thousand miners, widows, coalfield community members and union supporters at the UMWA’s rally in front of the U.S. Capitol.

“I congratulate United Mine Workers of America President Cecil Roberts and the entire mine workers’ union on this important victory,” said APWU President Mark Dimondstein. “They stood by their members, and took to the streets to secure these benefits. This shows what true worker solidarity and community activism can accomplish.”

“Tens of thousands of our members, both retired and active, have marched, rallied, written letters and made phone calls to their representatives in Washington, urging passage of this legislation,” said UMWA International President Cecil E. Roberts. “They deserve the lion’s share of the credit for getting us to this day.”

According to the UMWA, the government will now provide retirement health care to ‘orphaned’ union miners, to those who lost their coverage because of a recent coal company bankruptcy or closure.

“Congress has done the right thing by providing permanent funding for the care coal miners need,” said AFL-CIO President Richard Trumka, who is a former International President of the UMWA. “Union members kept our part of the bargain while mining corporations used bankruptcy laws to break their promises to provide good health benefits and a secure retirement.”

This legislation, “will mean the difference between life and death for thousands of senior citizens throughout the coalfields,” Roberts said.

However, there is another part of the struggle, securing the miners’ pension fund, which is still unresolved. “As much as we enjoy this victory the fight is not over. We must waste no time to develop a solution to the pension crisis that is looming for even more retired miners and widows. If Congress does not act soon, 89,000 current pensions and 30,000 of those who are owed a pension in the future will not get what they earned.”

Go to umwa.org to learn more about the UMWA’s triumphant battle to secure retirement health care for their members and find out what you can do to support their ongoing struggle to preserve the retired miners’ pensions.