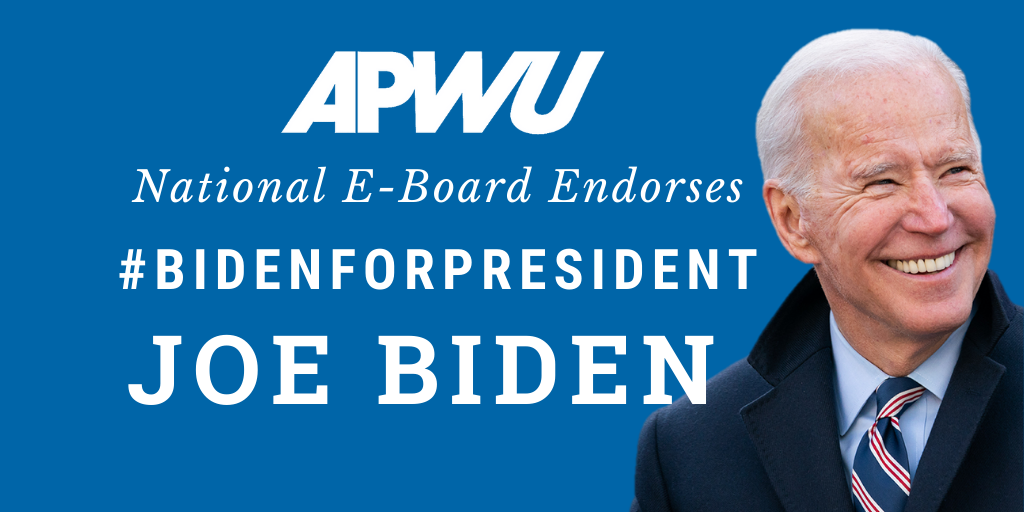 June 9, 2020
The American Postal Workers Union’s National Executive Board has voted to endorse Joe Biden for President of the United States. In their decision, the Board recognized his record of advancing the cause of unions, his support for the public Postal Service, postal workers, and his opposition to postal privatization.

As our country has confronted the pandemic, postal workers have heroically highlighted once again the importance of an affordable, universal and public Postal Service. Even as we have ensured that essential medicines, supplies and mail reached every address, serving the people at a time of incredible need, the Postal Service faces the prospect of closure. Without an immediate infusion of cash from Congress and the White House, the Postal Service will likely run out of money by fall due to COVID-related revenue losses.

Joe Biden recognized the stakes of this moment in a recent letter to the National Executive Board when he stated “This crisis makes clear: the USPS doesn’t just perform the integral task of offering mailing and shipping services in accordance with its Universal Service Obligation, it is also often the social and economic lifeline to rural and lower-income communities across the nation. Our support for the Postal Service must match the commitment that its workers bring to serving our communities….I will continue to protect the Postal Service from all attempts at privatization.”

In 2018, the White House issued two reports which laid out plans to raise mail and package prices while cutting service, to do away with our hard-won collective bargaining rights achieved in the heroic and Great Postal Strike of 1970, and even the outright sale of the people’s Postal Service to private corporations. Recently, the White House went so far as to threaten to veto a major COVID stimulus package if it included support for the Postal Service even though both the House and Senate had reached a bipartisan compromise to ensure funding. The White House and the Treasury Department are advancing their plans to sacrifice the Postal Service on the altar of private profit, using the crisis of the pandemic to carry out their destructive policies. President Trump has labeled the public Postal Service “a joke”, an insult to every postal worker and customer. In addition, President Trump’s policies are hostile to unions and workers’ rights, oppose living wages and a healthy environment, undermine Veteran benefits, threaten the vital programs of Social Security and Medicare and openly incite dangerous racial, ethnic and religious bigotry and division when the working class needs unity and solidarity more than ever to advance our common interests.

“The Executive Board fully recognizes and respects that our fellow members hold a wide array of political views and that their choices in this election will be a matter of personal conscience. However, the contrast in this presidential race is clear for postal workers,” said APWU President Mark Dimondstein. “Donald Trump’s policies have made it abundantly clear that he is a serious threat to our decent postal jobs, our unions and to the right of the people to a public Postal Service. Joe Biden has committed to support the Postal Service and its dedicated postal workers. Our union will continue to help build the movement to defend the public Postal Service and win a more just society.”

The APWU National Executive Board believes that Joe Biden is the best choice in the upcoming presidential election. Former Vice-President Biden remains committed to helping end the assault on the Postal Service and our job security and will work with the APWU to secure the robust, vibrant, public Postal Service the people of our country deserve and help defend our rights to good, family-sustaining union jobs. As such, the National Executive Board committed to make every effort to educate and engage our members to elect Joe Biden as the next President of the United States and encourages members to be fully engaged in the 2020 presidential election.