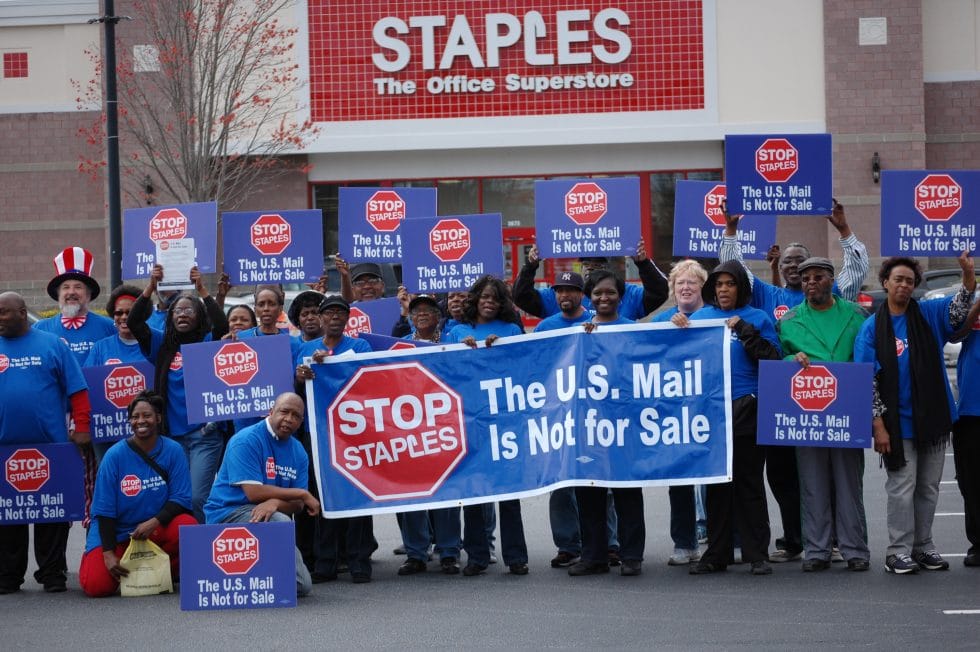 Web News Article #: 009-2015
01/16/2015 – Outgoing Postmaster General Patrick Donahoe made headlines when he blamed postal unions and big mailers for the Postal Service’s problems in a recent farewell address, but he made a few other surprising comments as well.

In a speech to the National Press Club on Jan. 6, Donahoe admitted that the union’s Stop Staples campaign has “disrupted” the Postal Service’s deal with the office-supply chain. It has also made it more difficult for the USPS to get other businesses to participate in management’s scheme to privatize postal retail operations, he said.

“This shows the effectiveness of the Stop Staples campaign,” APWU President Mark Dimondstein said. “When you’re out there telling your co-workers, friends and neighbors not to shop at Staples, you’re making a difference. When you pass out flyers at Staples stores and ask their customers to shop elsewhere, you’re protecting living-wage, union jobs, and you’re protecting the public Postal Service.”

In the speech to reporters, Donahoe mischaracterized the union’s position, saying “the APWU approach is to try to keep all of our transactions in post offices.”

Not true. The union would have considered supporting the pilot if the Staples postal counters were staffed with USPS employees. As the APWU reported just after President Mark Dimondstein took office in 2013, “In a meeting with Postmaster General Patrick Donahoe on Nov. 20, the union president insisted that if the plan proceeds, the postal units at Staples must be staffed by career postal employees.”

Dimondstein added, “The APWU supports the expansion of postal services. However, we are adamantly opposed to USPS plans to replace good-paying union jobs with non-union, low-wage jobs held by workers who have no accountability for the safety and security of the mail.”

“We’re going to continue to fight the Postal Service’s dirty deal with Staples until they get out of the postal business,” Dimondstein said.

via Donahoe: ‘Stop Staples’ Campaign is Taking a Toll | APWU.