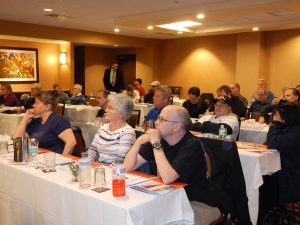 A major theme was how union activists can win support and involvement from union members. Contract Action Teams (CATs) will serve as the basic unit of the campaign and will recruit volunteers from among union members, potential union members and retirees. Extensive discussion took place about specific techniques for making that happen.

How Can We Move Management?

Discussion also centered on another basic question: How can we pressure management to negotiate a fair contract?

Michael Flynn, MVS Director, Albany NY Local, said, “I think this training is a good asset and essential in organizing and conveying our union’s message to the public.”

“It’s a new direction and challenge for the APWU,” said Northeast Region Coordinator John Dirzius. “Overall the training was well-received and provided a clear meaning to the convention resolution, Standing Up and Fighting Back.”

“These forces, whether from within the USPS, from corporate America or Capitol Hill, are very real and very dangerous,” he said.

More than 40 people attended the training session. Among them were six National Business Agents and 35 union activists representing 13 locals, including Bob Johnson, president of the Greater Connecticut Area Local and chairman of the Rank-and-File Bargaining Advisory Committee.

More local activists from the Northeast Region will attend training with leaders from the Eastern Region next week.

APWU President Mark Dimondstein encouraged union activists to participate in upcoming training sessions. “These sessions are an important part of our preparation for the battle to win a good contract and better service. If you’re interested, please contact your local president,” he said.

via Contract Training Session: Ready to Get Started! | APWU.