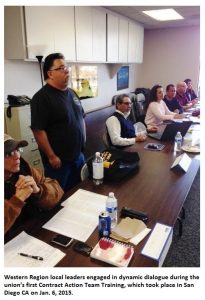 Web News Article #: 001-2015
01/09/2015 – Training for the union’s campaign to win a good contract got underway for locals in the APWU’s Western Region on Jan. 6, and participants left the two-day session downright excited about the possibilities.

“I have to admit I was apprehensive at first, but came out more enthusiastic than ever,” said Eddie Cooper, executive vice president of the San Diego Local.

Apparently, Cooper wasn’t alone. “I would say a significant percentage of the participants were skeptical when the session started,” said Bill Fletcher Jr., who led the training. Fletcher is a staff person for the American Federation of Government Employees who is assisting the APWU with the campaign.  “After we broke down the campaign into its component parts, people began to believe we can do this,” he said.

How Can We Win?

Discussion focused on a fundamental question: How can we pressure management to negotiate a fair contract?

A central theme was “how and why our struggle to secure a decent contract relates to our efforts to ensure we all have a vibrant Postal Service for all Americans,” said Western Region Coordinator Omar Gonzalez.  Participants discussed examples from other unions’ contract campaigns and how their victories and defeats can inform our efforts.

The other major theme was how to win support and involvement from union members. Contract Action Teams (CATs) will serve as the basic unit of the campaign and will recruit volunteers from among union members, potential union members and retirees. There was extensive discussion of specific techniques for making that happen. “The word ‘apathy’ was banned from the discourse,” Gonzalez said.

“As a new local president, this CAT training even helps me overall on how to engage my members,” said John Flores of the Bakersfield Local.

“’Defeat is not an option’ is a great theme for this effort,” said Bob Preston, president of the Colorado Springs Local. “This can be a phoenix for APWU and make us stronger in face of our struggles,” said Carol Federico, Maintenance Craft director of the San Jose Local.

APWU President Mark Dimondstein encouraged union activists to participate in upcoming training sessions. “These sessions are an important part of our preparation for the battle to win a good contract and better service. If you’re interested, please contact your local president,” he said.