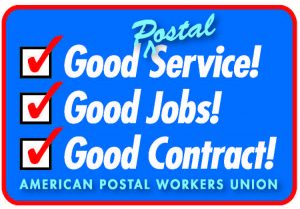 05/06/2016 – Arbitration hearings on the APWU Collective Bargaining Agreement with the Postal Service have concluded and the union expects a decision in 30 to 60 days, President Mark Dimondstein has announced.

During 18 days of hearings that focused primarily on the economic provisions on the new contract, the union and management presented their positions, called witnesses, submitted evidence, and offered rebuttals.

For more information on the negotiations and the fight for a good contract, click here