By Jason Del Rey – May 8, 2015
Get ready to see bright green Amazon delivery trucks in the Garden State.

ZIP code checks showed that Amazon is delivering groceries and produce such as milk, juice and steaks to a bunch of areas of Northern New Jersey, including Hoboken, Weehawken, Jersey City, Newark, Paramus, Edison, Montclair and New Brunswick.

Amazon doesn’t appear to be delivering to the northernmost parts of the state — places like Montvale and Sparta — or cities in central New Jersey like Trenton. Prospective customers can check Amazon Fresh delivery ZIP codes here.

The expansion is not a huge surprise, considering that Amazon started delivering groceries to parts of Brooklyn and Manhattan in the last eight months, and at least some of the food being delivered is coming from a big warehouse in Avenel, New Jersey. But with each new market in which Amazon launches its Fresh business, it becomes more clear that this initiative is no longer an experiment; it’s a big part of where Amazon expects to get sales growth from in the future. Amazon’s grocery business started on the west coast in Seattle and has expanded to parts of Northern and Southern California, as well as Philadelphia, in the last two years.

Grocery delivery has become more popular in the last few years, but still accounts for a low single-digit percentage of the $600 billion grocery industry here. In the New York metro area, Amazon is competing against local online grocers Peapod and Fresh Direct, which has been around for more than a decade. It also faces off in some markets against well-funded startups such as Instacart, which has partnerships with grocery chains including Whole Foods. Some traditional grocers offer delivery as well.

Amazon’s current model still faces questions. New Fresh customers have to be members of Prime, the $99 membership program that includes two-day delivery on non-grocery items as well as access to streaming video and music. Through June, these people can try out grocery delivery for no extra delivery charge on orders of $50 or more. After June, however, customers will need to upgrade to a $299 Prime membership, called Prime Fresh.

Prime Fresh members still have a delivery minimum, though it is $35 instead of the $50 threshold in the free trial. And Amazon grocery deliveries are delivered quickly, on the night or morning after they are ordered. Still, the $299 price tag could be a big hurdle to customer adoption if Amazon sticks with it. 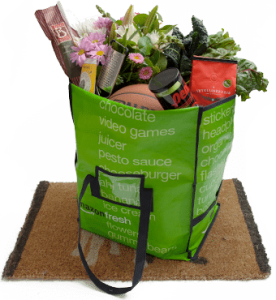 The move into New Jersey comes shortly after Amazon announced it would offer a limited number of frozen and perishable items such as milk and juice for delivery in Manhattan as part of a program called Prime Now. This is separate from the Amazon Fresh initiative, which offers a much wider selection of groceries. Prime Now allows Prime members to get two-hour delivery on a smaller selection of goods for free, and one-hour delivery for an extra $7.99 fee.