The election of Donald Trump is dangerous for all working people, including and especially immigrants, people of color, women, LGBTQ people and the disabled. Postal workers and customers can expect stepped-up assaults on our public postal service.

A president Trump, coupled with Republican control of the House and Senate, raises the very real possibility of his appointment of a reactionary Postal Board of Governors seeking to further dismantle and privatize the USPS; an employer-friendly National Labor Relations Board which could reverse the gains of past years; a conservative Supreme Court hostile to public sector unions; and an anti-union, anti-worker Department of Labor. National “Right-to-Work” legislation, which would be a major blow to the labor movement, is a top priority of the new administration. This would hurt the growing national movement for $15 and a union.

A Trump presidency threatens the deportation of millions of undocumented workers; the exclusion, surveillance, profiling and incarceration of our Muslim sisters and brothers; major restrictions on women’s reproductive rights; the return of anti-LGBTQ laws; and increased harassment, brutalizing, and incarceration of Black and Brown people by local police departments. It threatens to support environmentally dangerous projects like the Dakota pipeline, and repression of the Indigenous Nations who are fighting it.

Tax cuts for the rich and even more funds to the military (making another war more likely) will be used to justify austerity, with deep cuts to Medicaid, Social Security, food stamps, education, housing and other programs that working people need to survive. The Trump victory has emboldened racist, sexist, homophobic and xenophobic predators who are intimidating and assaulting our most vulnerable residents.

Spontaneous “Not My President” demonstrations have erupted across the country immediately following the Trump election. Many student, labor, community and women’s groups are planning for massive protests on the weekend of Trump’s Inauguration, January 20-22, in Washington, D.C. and other cities.

To save our public postal service and living-wage, union postal jobs, we will need to help build a national United Front of all those threatened by the Trump presidency, in the spirit of An Injury to One is an Injury to All.

We will need to mobilize our networks, in collaboration with other labor, school, faith, community and women’s groups, to encourage and participate in organizing large and small actions leading up to and including Inauguration Weekend, as part of a nationwide united movement against Trump and all he represents. 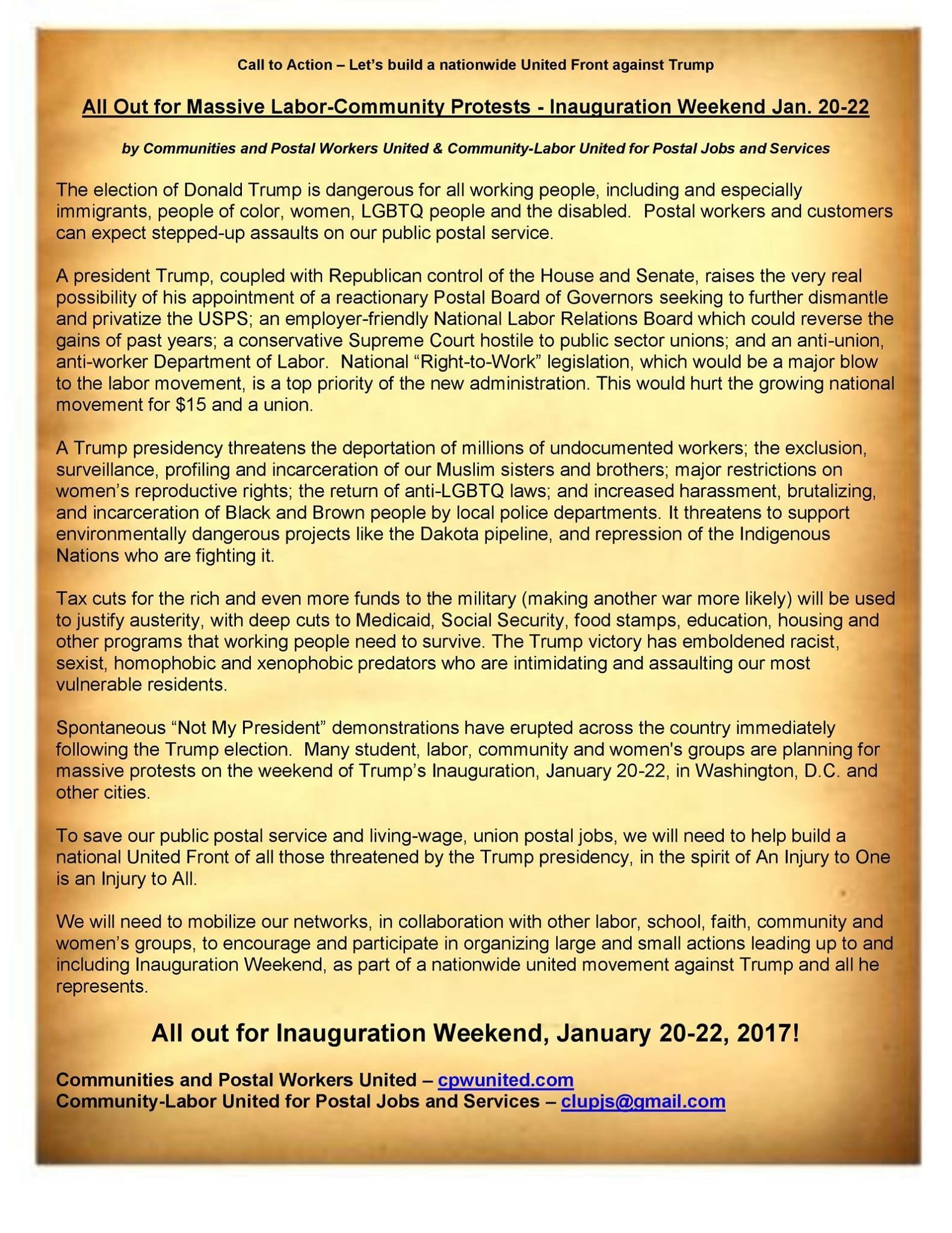