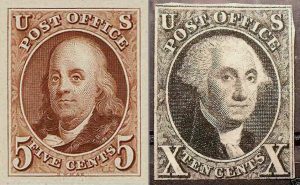 Mail delivery and an earlier version of the Service had been in place since 1775, when Benjamin Franklin was named as the first postmaster and the Continental Congress paid him a salary of $1,000 a year.

The Articles of Confederation, which preceded the Constitution, also made it clear that the government “shall also have the sole and exclusive right and power of … establishing or regulating post offices from one State to another, throughout all the United States, and exacting such postage on the papers passing through the same as may be requisite to defray the expenses of the said office.”

And the Constitution made sure that these crucial services were preserved. In Article I, Section 8, the Constitution gave Congress the ability “To establish Post Offices and post Roads.”  That means not only does Congress have the power to create a postal system, it had the ability to acquire and control the land for the “post roads” to carry the mail and the buildings needed to maintain the system.

But it was the Postal Act of 1792 that established the foundation of a modern Postal Service. Congress granted the Postmaster General broader powers. And the act addressed issues related to commerce and privacy.

The act ensured newspapers could be sent at low mail rates, which facilitated a free press across the new states. The law also protected privacy by making it illegal for postal officials to open mail unless it was undeliverable. Offenders faced up to six months in jail and a $300 fine.

And to make sure people knew Congress was serious, section 17 of the act included death as one of the possible punishments for robbing a mail delivery person, or for stealing mail from a post office. (In 1872, Congress reduced the penalty to five years in prison.)

Congress also called for more mail routes to service an expanding nation. The newly expanded service kept its headquarters in Philadelphia, but moved to Washington, D.C. in 1800.

via A big day in the history of the United States Postal Service.