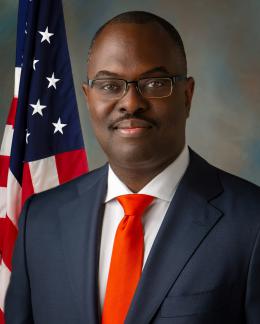 PRC Press Release – January 25, 2021
Washington, DC – The Postal Regulatory Commission (Commission) is pleased to announce that President Joseph R. Biden, Jr. has designated Commissioner Michael M. Kubayanda chairman of the Commission, succeeding Robert G. Taub.“I am grateful for the opportunity to serve as chairman and look forward to serving all Americans, working with my colleagues in the Commission and throughout the Federal government, and connecting with a wide spectrum of stakeholders,” said Chairman Kubayanda. “I would especially like to thank Chairman Taub for his exceptional leadership of the Commission for more than six years. I plan to continue his approach of bipartisanship and collegiality.”

Chairman Kubayanda was first nominated to the Commission in June 2018 by President Donald J. Trump and is currently serving his first term as commissioner. In August 2019, he was unanimously elected to serve as vice-chairman of the agency and served in that position through the end of 2020.

Prior to joining the Commission, Chairman Kubayanda worked on privacy strategy and compliance issues with a technology startup. He has a unique understanding of a wide range of postal matters, given his work with the U.S. Postal Service Office of Inspector General (OIG) as Director, Government Relations, a role in which he worked with OIG officials to support the work of inspectors general in data analytics. In the OIG’s research group, he oversaw research on technical issues and wrote reports addressing postal economics and price regulation, intellectual property, and public-private partnerships, while serving as an advisor to colleagues on issues such as privacy, knowledge management, and innovation. Before his work with the OIG, he served on the staff of the House Oversight and Government Reform Committee.