“We didn’t know where they were coming from!” Hart said.

The thousands of holes have caused the wood to split, according to Hart. Contractors estimate the cost to repair the porch is about $5,000.

It took months, but Hart said she finally figured out what she believes caused the mysterious marks.

“I heard a little struggle going on out here on the porch,” Hart recalled. “I opened the front door and looked and the mail lady was actually stuck in the floor of my porch!”

“I came out and I helped her, and I was pretty appalled to see what type of shoes she was wearing,” Hart said. 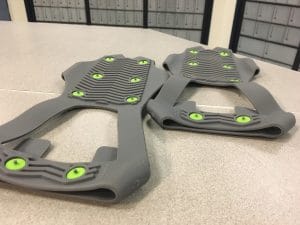 Target 12 went to the Post Office to get a look at those shoes. Christine Dugas, a spokesperson for the United States Postal Service, said the special gear is required for winter months.

“They fit over their shoes,” Dugas explained. “They have these little protrusions on the bottom that really are great at gripping the snow and ice.”

If customers are concerned about the spikes damaging their property, Dugas said the simple, temporary fix is a rubber mat.

“The other thing you can do, and what the Postal Service typically recommends is move the box,” Dugas added. “You could move it to the bottom of the steps if it’s a porch or deck you’re concerned about, or to the curb. But do not move your box until you talk to your postmaster. ”

That’s exactly what Hart did. She also filed a claim with the USPS for the cost to replace her damaged porch. According to a letter Hart showed Target 12, the claim was denied.

Hart is appealing the decision.

According to a federal public records request filed by Target 12, the USPS paid out $84 million dollars last year in tort claims. That figure includes property damage, injuries, and accidents.

“We work on reducing that number every single year,” Dugas said. “In fact that’s one of the reasons carriers are required to wear the footwear. The most important thing for us is to keep our employees safe and obviously the customers safe.”

In 2017 to date, the USPS has paid $73 million for 9,479 tort claims, filed by both customers and employees. Records show 436 additional claims were denied.

Injuries to Postal Carriers
According to the USPS, there are approximately 85,000 “slips, trips, and falls” reported annually by postal carriers.

“When you think about 156 million delivery points, and you think about 85,000 just in slips, trips and falls, then you can understand where that number would come in,” Dugas said.

“As we enter the winter season, what we really ask our customers that’s most important is shovel, and salt,” Dugas added.

How to file a claim
Customers and employees have two years from the date of alleged damage or injury to file a tort claim.

According to the USPS, a customer planning to file a tort claim should request the phone number of the tort claim representative. Customers will receive a form and instructions on how to file the claim.

If a tort claim is denied, the customer can file an appeal within six months of the denial date.

For missing or damaged mail, customers have 60 days to file a claim.