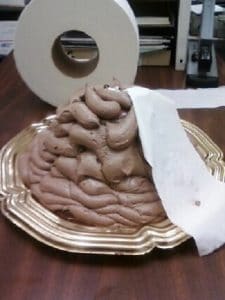 Postal employees not amused when a USPS Station Manager made employees a Poop Cake for a poor Mystery Shop. Understaffing led to the low Mystery Shop Score.

The manager made the cake to look like poop because the office received a bad score from a mystery shopper.

“Yup, we had a poopy day,” said Lucille Sacco.

Employees were angry about the cake.

“I thought it was appalling. I thought it was degrading to the employees and I just couldn’t believe it,” said Sam Wood, Southwest Florida President of American Postal Workers Union.

They were understaffed, but no matter how long the line, the US Postal Service requires workers to ask a list of questions to every customer.

“If they miss one, they get marked off for not asking those questions,” said Wood.

Sacco says clerks are forced to provide the best customer service, as quickly as they can.

The office’s final score was 48.

The US Postal Service released a statement about the incident.

“This unfortunate incident demonstrates poor judgment on the part of the responsible party, and does not represent the professionalism of postal managers in the local community and across the country. The Postal Service apologizes to employees who were offended.”

While it was intended to lighten the mood, it did just the opposite.

“I have never seen anything like that. And I don’t think it’s funny,” said Sacco.

via Postal workers not amused by “poop” cake