Where has the militancy of the APWU gone? – 21st Century Postal Worker 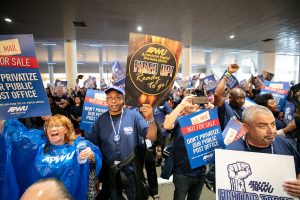 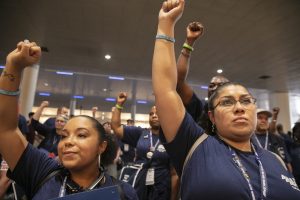 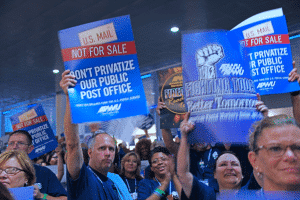 If you have ever gone to an APWU convention, you know that one of the highlights was always a great march by the delegates. I have been attending APWU conventions since 1982 and have marched with workers in Las Vegas, San Francisco, Chicago, etc., etc., etc. These marches taking to the streets have become an APWU tradition.

Sadly, this tradition came to a screeching halt at the 2018 APWU convention in Pittsburgh. Instead of a march, the delegates were herded into an uncomfortable area near the convention center and were unable to truly get our message about privatization of the postal service to the public.

Supposedly, the reason for containing us in this area was because of a concern about flooding. For those who were there they can attest that it was a sunny day and if there had been a flood those present in this cooped up area would have drowned. I suspect the APWU was asked to not march by the city of Pittsburgh due to concerns caused by a previous march against police brutality.

Where has the militancy of the APWU gone? We should have marched. Moe Biller is rolling over in his grave.