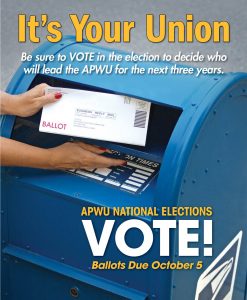 By my own estimate, some 20% of the Members I have spoken to here in Atlanta say they did not receive a ballot. We are a some 2,700 Member Local and I personally polled approximately 1,000 of these.

Some may have mistaken their ballot as bulk mail advertising and discarded it because this year’s ballots do not appear to me to be predominate identified as APWU ELECTION BALLOT ENCLOSED. But that does not account for the many Stewards and active Members who were expecting and looking for their ballots in the mail who did not receive them.

Of course we will never know how exactly how many ballots were not received by our Members, but there is one point of data that will be known by the AAA running this election and it should be released for public knowledge. And that point of data is exactly how many Members requested a replacement ballot by Local. In this way we can determine what Locals were affected the most with missing ballots.

If we take the number of requested replacement ballots and analyze that number in light of the facts that some did not join the APWU before the deadline to vote and other such circumstances that would explain why they legitimately did not receive a ballot. Then contrast that with the fact that many Members simply did not put out the effort to call or go online to request a replacement ballot, we can draw a better picture of how much or how little missing ballots affected this election in each Local in hopes of improving our future APWU elections.

With that said, the short window this time around from when the ballots should have been received to the length of time needed to request and receive a replacement ballot, then mail it back in to be received before the deadline is simply insufficient. If you have not already requested your replacement ballot, you should still try to do so, but I think it is unlikely that you can get it back in time to be counted at this late date. Ballots not mailed in by Friday September 30th have an exponentially increasing chance of not being received in time to be counted.

Was this all by design or by incompetence?

The point is to learn from these problems and to DEMAND they be corrected before the next election so that we don’t keep repeating them.