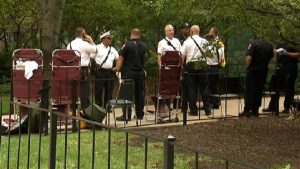 Employees said the air conditioning in the building was not working, and it was at least 100 degrees inside. About 10 ambulances were called to the post office located at W Ohio and N Dearborn Streets around 8 a.m., according to the Chicago Fire Department.

CHICAGO (WLS) — Ambulances rushed 13 employees at a River North post office to the hospital with heat-related illness Saturday morning, according to the Chicago Fire Department.

According to witnesses, temperatures inside the facility at Ohio and Dearborn were near 100 degrees and they said it has been that way since the middle of the week. Another 23 workers were treated on the scene.

People were working at the facility since 5 a.m. The first one in the ambulance was a supervisor who was throwing up because of the heat. The conditions of those transported are not known.

“You go through the door…you could feel like an oven on and you can’t open windows up there so everybody just started getting dizzy and throwing up, getting sick,” said postal worker Aileen Harris.

The entire facility has been evacuated and workers won’t be let back in until temperatures come down.

“We’re not going to have the rest of our employees work in there, it’s clearly unsafe,” said USPS Chicago District spokesperson Mark Reynolds. “We value the safety of our employees.”

A CTA cooling bus was sent to the scene.